It was much like any other hospital. There was an ambulance parked in readiness outside the intensive care unit. There were staff milling about in scrubs. There was an X-ray department and a neonatal ward. The only oddity was that the patients were all koalas.

I met a few of them. Barry had scoliosis and they were hand-feeding him with a syringe. Kaylee had lost a hind leg and an eye. Others, whose names I missed, looked as if they had been sitting in a muddy puddle, which apparently means they have chlamydia.’Wet bottom,’ they call it in koalas.

The koalas, poor things, just want to climb high up a gum tree and curl up in a ball in the crook of a branch and chew leaves.  But their habitat is disappearing, because humans keep tearing it down to build houses, and if they are not burned in bush fires, they are mauled by dogs or knocked down by cars; or they get wet bottom or KIDS, which is the koala version of AIDS.

The Koala Hospital in Port Macquarie has been run by volunteers since 1973. They take in around two hundred sick and injured koalas every year and look to release them back into the wild if they can. They give free tours to visitors in the afternoons. 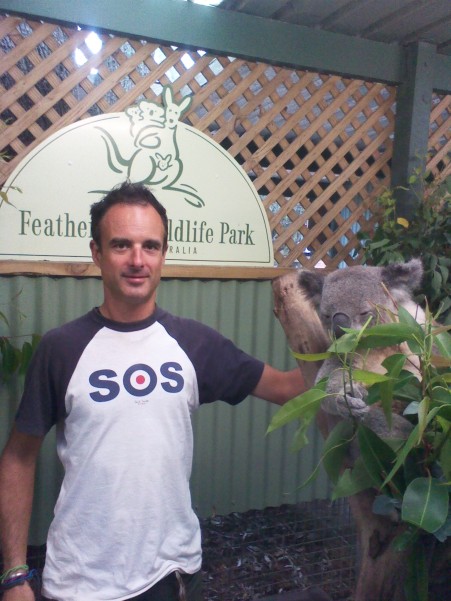 I had first seen koalas close up at the Featherdale Wildlife Park in the Suburbs of Sydney, where I had been a few days before. Red kangaroos were hopping free and were so used to humans you could bend down to stroke them; wombats too. Both had fur as soft as a rabbit’s. But it was the koala which melted my heart.

The keeper carried it out, holding it as you would hold a cat, with a hand under its bum and another loosely on its back while it rested its front paws on her shoulder. I stroked it briefly and got a very unflattering photograph next to it, but I wanted to hold one like the keeper.

I got the chance a few weeks later at the Lone Pine Koala Sanctuary a bus ride away from Brisbane. They had a platypus there, as well, and I tried not to laugh at it but it seems to have  been built from nature’s parts bin: a mammal with the bill of a duck, the body of an otter, the tail of a beaver, the fur of a mole and webbed feet, which finds its prey through electroreception like a shark, defends itself with venom like a snake and lays eggs like a bird.

Victoria the koala didn’t like the lady in front of me and turned away from her; no reassurance from the keeper would persuade her. She seemed comfortable enough with me, though. I made a cradle of my hands for her to sit on and tickled her fur with a thumb while she steadied herself with her paws on my chest. I didn’t want to hand her back. 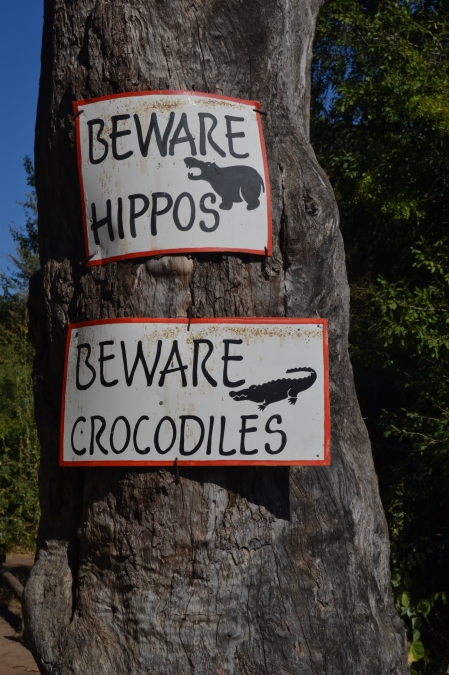 It was cold in the early morning in an open Land Cruiser. I layered up in just about all of my clothes, knowing that I would have to peel most of them off after the sun came up. But it was dawn and, as yet, the only hint of the sun was a pinkish effulgence along the horizon. It was a good time for spotting game.

Just inside the park, there was a buffalo carcass, picked clean in the night, the best bits presumably eaten by lions, the rest polished off by vultures. There was a flock of them sitting in the trees around it, and a little further down the track, a coalition of lions. A lioness crossed the track right in front of the jeep; her fur was still stained with the blood of the buffalo. She walked with pugnacious purpose, as if on her way to argue with some petty bureaucrat.

Giraffes and kudu grazed peacefully just a few metres from the lions, but it no longer surprised me, as it had when I first got to Africa, how close together the carnivores and herbivores lived.

We were camping in the grounds of an upscale safari lodge on the banks of the Chobe River, across two bridges, through trees and way out of sight of the overfed, big-tipping tourists. There were signs nailed to the trees near the river which read Beware Crocodiles and Beware Hippos, with a crude picture of each in case you were not sure what the big thing was which was chasing you down.

Hippos might be herbivores, but they panic if they think their route to the water is blocked and kill more people than any other animal in Africa. And, no, smartarse, malarial mosquitos don’t count.

In the mid-afternoon, when the heat of the day had begun to die down, we went out on the river in a safari boat. 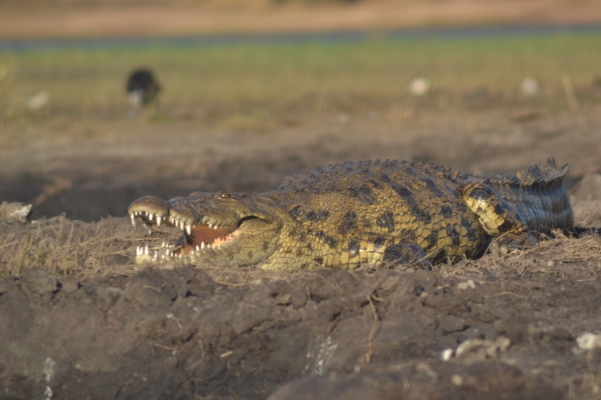 The water was a rich royal blue; the sun glinted on its surface. The soil on the banking was dry and dusty but dotted with trees; there was a tangle of roots at the water’s edge. A telegraph pole, shouldered aside by an elephant, stood at a 45-degree angle.

A crocodile lay at the side of the river, its lime green eyes twinkling with malevolence, a sharp-toothed grin on its face. “He’d make a good handbag,” someone on the boat said, distastefully; and the crocodile was probably thinking along similar lines about her.

There were islands in the middle of the river and a family of four hippos had migrated to one for a spa day: they luxuriated in the mud and laid down to snooze while oxpeckers fussed over them, ridding them of bothersome parasites.

A buffalo grazed up to its chest in reeds while a white egret strutted about on its back. More egrets poked about in the reeds and were startled when a hippo surfaced without warning and stayed for a while with its wet head glistening above the water and its dangerous bulk below like a submarine. The egrets came back when they saw that it was only a hippo and one pecked at its snout while the hippo watched indulgently.

Another croc lay on the island with its horrible mouth wedged open for ventilation. A flock of cormorants sat dangerously close to the crocodile, as if for a dare.

A herd of elephants shuffled along the bank, stopping to pick up trunks-full of dust and toss it over themselves. They got to the water’s edge, limbered in and swam across in line astern; the calves entwined their trunks around their mothers’ tails, like small children holding a parent’s hand when crossing the road.

The sun began to set again, then. It tumbled down behind the acacia trees and vanished from sight, leaving only a salmon pink glow in the sky.

There is an art to getting on a camel. No one told me what it was. I got on like a drunk trying to scale a fence. The Bedouin, then, told the camel to get up and, in three distinct movements, it thrust its head forward, extended its back legs – tipping me forward as if in a roller-coaster going over the top – then brought its front legs up to meet them.

There was a group of us – British, French, Dutch, Austrian, Canadian, Korean and Japanese – gathered from hotels, hostels and riads around Marrakesh and driven 350 miles across country to the edge of the Sahara where the road stopped abruptly and the towns thinned out to villages, then hamlets and finally to nothing but an isolated hostel and sand. The camel train would take us the rest of the way.

The camels were roped together in two groups of four with a Bedouin leading each group. I had the camel at the front of the train behind a Bedouin in an ankle-length thobe and turban, and jeans and Asics trainers. He hummed to himself as he ambled through the dunes, until his smartphone rang. He was a digital nomad.

The winds had stacked, shaped, sculpted, smoothed and polished the sand into hills and valleys, peaks and troughs, soaring anything up to five hundred feet, then plunging back to the desert floor, gently undulating, and soaring up again; the ridges were sharply creased, the slopes pristine.

It was all the same to the camels, who plodded along with deliberate steps, never slowing, never slipping, up sinuous inclines, along knife-edge trails across the dunes, and down slopes steep enough to worry me about going over the handlebars. They have a reputation for being foul-tempered things which spit and burp and growl, but then so do some of us. These camels had a relaxed air and beatific smiles. They seemed barely to notice, let alone to care about, the strangers on their backs.

The sand glowed orange in the dying sun of the late afternoon; the shadows were long and dark. We stopped at the top of a dune and looked west and watched the sun slip below the horizon, then set off again in the twilight.

It was a lot more comfortable on the camel than I imagined it would be, but my thighs eventually began to protest at constantly stretching around the saddle bags and I was glad when we got to the camp.

The camels sank to their knees and I got off as clumsily as I had got on. The Bedouins unloaded the saddle bags and we dumped our stuff in the tents. They were a roughly rectangular shape, flat-roofed, waist-high, with a wooden frame covered with stitched woollen blankets.

There was a big communal tent, too, with flickering lanterns, low tables, Berber rugs and a family of tabby cats. The Bedouins poured out mint tea, lit a crackling camp fire and cooked a simple but perfectly good tagine. The cats noisily begged us to share it and, as always, it worked with me: they got the chicken and I had the bread and potatoes.

I had packed an overnight bag and shorts and a t-shirt to sleep in, but I am not sure where I thought I was going to find water, nor whether I really envisaged stripping off and getting ready for bed in the dark and the cold of the desert. As it was, I just laid down fully-clothed and pulled a couple of Berber rugs over me.

The cats crept into the tent in the middle of the night, or at least I assume it was them: something around that size bolted out when I got up to go to the toilet, and I didn’t want to think about what else it might be. 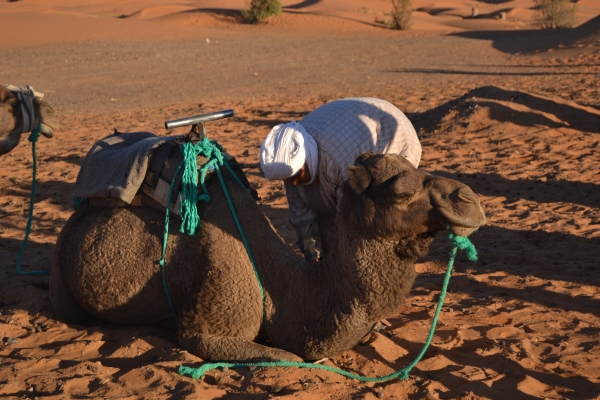 A wind had picked up by then and howled with a quiet determination. The sky was crammed with stars. The camels were sleeping with their necks stretched out across the sand in front of them. The last embers of the fire glowed weakly.

I was perhaps an hour, as the camel plods, from the nearest hamlet but it was easy to imagine that I was hundreds of miles in any direction from human habitation, further from the modern world and all its annoyances: far from endless TV shows about forgotten celebrities and amateur property developers, interspersed with excitable adverts for products which nobody needs, from constant finger-wagging and pettifogging rules, from unsmiling one-upmanship where fun ought to be, from lives too busy for living. It was just an illusion, though.

We were back on the camels in the bitter cold dawn, hooded and gloved, to welcome the sun back up.