Some weeks before I booked, other guests had complained that the water tasted funny. When an engineer went onto the roof to check the tank, he found the body of a girl floating in it. She had been there for three weeks.

The Cecil has had a miserable history. It was a smart hotel when it opened, in the Jazz Age, for business travellers when LA was rapidly growing and downtown was stuffed with banks. But the bottom fell out of the neighbourhood in the Great Depression and there were no more business travellers. The hotels along Main became single room occupancy, flophouses, cheap rooms let by the week and month to the chronically out of luck: last stop before the streets.

Alcoholics Anonymous held meetings in the Cecil in the early forties. A series of people jumped to their deaths from its windows in the fifties and sixties. One landed on a hapless passer-by and killed him too. A woman was strangled, stabbed and raped in her room in the early sixties. Then the serial killers, Richard “Nightstalker” Ramirez and Jack Unterwenger, based themselves there in the eighties and nineties as they prowled Skid Row for victims.

But, in the late noughties, when downtown LA took tentative steps upmarket, the Cecil’s new owners began to convert it back to a regular hotel. “Change checks in at a skid row hotel,” snooted the LA Times, “…the hip and near-homeless meet in the lobby of the 80-year-old Cecil… and in the dim hallways, one sometimes encounters guests who have been using drugs or alcohol”. Their reporter should try staying in Ibiza.

Five years on, it looked grand to me with its cavernous lobby, its marble floor, its dark wood panelling, polished brass fittings and chandeliers. High on the side wall there was an old painted sign which had obviously once read “Low Monthly & Weekly Rates” in the days when the Cecil was a flophouse, but “Monthly” had been clumsily overpainted with “Daily”. If I noticed it then, though, I missed the significance.

I was straight off a sleepless flight across the Pacific and dreaming of a room of my own – I had been in dorms for the past ten weeks. But when the receptionist swiped my card, the bank said no. It said it again, several times, when I tried to get cash from ATM’s. The bank’s computer thought it was being clever when it spotted that my card had been used on two continents at about the same time and stopped it. But no one had told it about the international dateline.

I was in Skid Row with no means of paying for a room for the night.

I usually carry a couple of hundred dollars for emergency funds, but most had been stolen from the safety deposit box of a dodgy hotel in Cambodia. My spare credit card had been cancelled in Australia after I thoughtlessly entered the wrong PIN, and I had never got round to calling the company. My phone would not work in the States, and the hotel refused to let me use theirs, and I wasted my time and limited dollars with payphones outside. All I could do was to bang off an email to family and friends and hope that one of them would pick it up and could help. But it was the middle of the night in the UK by then.

The girl on reception was as helpful as you would imagine her to be to a customer who arrived without money, but at least she let me leave my bags there.

“LA is the loneliest and most brutal of American cities,” mused Kerouac while staying in a flophouse on this very street, where ”the beatest characters in the country swarmed on the sidewalks”. Even now, with gentrification well underway, half the people you see look as if they would kill you for $20.The other half look as if they would do it for fun.

There were signs on the stores on 7th and Main which read “NO drugs, NO drug dealers, NO loitering, NO weapons. The Los Angeles Police Department makes regular and frecuent [sic] patrols of these premises”. I saw all four of the things that were supposedly unwelcome, but never saw the LAPD. 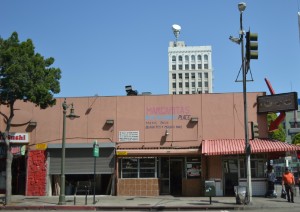 A steady procession of derelicts made their way down the street with their pitiful things piled up in old trolleys. Some shuffled along, head down, shrinking from the rest of the world, while others were shouty-aggressive, ready to take it on. One guy stopped and asked me for change, and I shook my head. I barely had any change. “I ain’t got no shirt bro,” he protested, “I aint got no shirt” and held open his jacket to prove it. Another guy parked his trolley in the middle of the road and raged at some goddam motherfuckers in his head. I glanced across and he called me a motherfucker as well. I ought to have known better than to look. I saw the same guy later on, powering down the street with a knife in the back of his waistband, the hilt on open display.

A group of beat men sat in a row on the corner of 6th, one in a beat wheelchair, the others with their backs to a building, legs stretched out on the pavement. The smog of an Amsterdam coffee shop clung to the air around them. The man searching the bins in front of the Cecil had a Hemingway beard and a grimy face and looked at a glance to be somewhere the wrong side of fifty; but as I watched him I saw that he could not have been much more than thirty. Across the road, there was a guy sprawled out against a fence, who had lost a shoe and was halfway to losing the sock as well but was far too blasted to care.

I felt desperately sorry for all of the people I saw, but anxious – nonetheless – at the thought of spending a night on the streets among them.

Afternoon bled into evening, then evening into night. A friendlier girl took over reception and I talked her into giving me a card for the lounge upstairs; but it was against her better judgment, and I guess understandably so. I was zombified from lack of sleep, my nerves were shot, and I had no confidence that I would be able to stay in the hotel all night. I stood, I sat, I checked my emails. I tried to read, I tried to write; I checked my emails again. The clock slowed to the pace of a night without sleep when every second lasts a minute and every minute an hour. I checked my emails one more time.

From outside, a furious shouting, an exchange of abuse, a chilling scream, the hurrying wails of the hardworked LAPD. A “brutal, hot, siren-whining night” just like Kerouac recalled. Every sound frayed my nerves a little bit more.

But by half-past one in the morning, my mother – bless her – had picked up my email, spoken to the hotel and paid the bill and I was in the room at last after two hours’ sleep in sixty.

8 thoughts on “Downtown and Almost Out in LA”