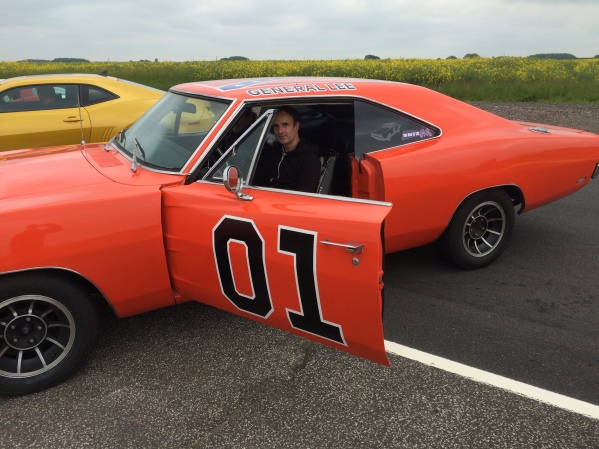 I had always wanted to drive a good ole Detroit muscle car.

Any from the Golden Age in the mid-to-late sixties would have done, but by preference a second generation Dodge Charger R/T: Bill Hickman’s car in Bullitt, Vin Diesel’s in Fast and Furious and the real star of The Dukes of Hazzard, the General Lee.

Warner Brothers had a fleet of twenty-odd General Lees for the 2005 movie, but some were just shells and many were trashed in filming. Aside from wrecks, there are apparently three survivors. I got the chance to drive one of them on a circuit.

It was parked in the pits, dwarfing a modern Camaro. The ’69 Charger is a great big brute of a car: seventeen feet by six and a half, as long and as wide as a builder’s van, but with a seven-litre V8 under what I suppose I ought to call the hood.

The driver’s door closed with an undamped clunk. (At least it was not welded shut.) The black vinyl interior was as battered and bruised as you would expect in a car built back in the year that Nixon was inaugurated, Neil Armstrong walked on the moon and Marvin Gaye Heard it through the Grapevine. It had the faint smell of old oil and unburned petrol which seems always to cling to classic cars.

There were big austere gauges, ringed with chrome, for speed and RPM, a row of smaller ones for fuel, battery charge, oil temperature and pressure, and a few clunky rocker switches for lights and wipers and such like. There was only a lap belt; and the steering wheel was a thin-rimmed wooden thing with three alloy spokes and a big fat boss in the middle. Health and safety had not yet been invented in 1969.

I pressed the brake pedal experimentally and it sank to the floor as if air had got into the system, but that was apparently normal. The steering wheel rocked a couple of inches in either direction before it thought about telling the roadwheels. That was normal, as well.

At idle speed, the General Lee krob-krob-krobbed like a fighter plane from the Second World War. I clicked the gear selector into Drive and moved out onto the track and the V8 snarled and settled into a staccato growl.

The General lurched into the first corner and drifted across to the other side of the track as a drunk might weave home from a late-night bar. It handled the way that a motorboat handles, but I ought to have expected that. Even in Bullitt, with a professional stunt driver at the wheel, the Charger tumbled round corners with all the finesse of a barrel which has bounced off the back of a truck. 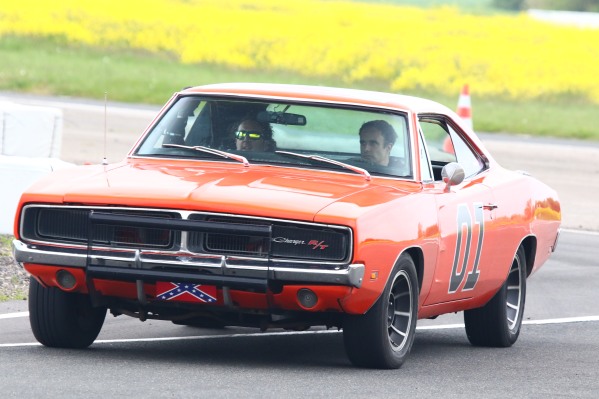 But then I was on the kind of straight which muscle cars were built for and buried the accelerator into the carpet and the General surged forward with the angry roar of a sorely provoked V8 – an awesome sound. Driving it hard on the straight was like surfing down stairs: exhilarating but tempered by the growing worry about what to do when you get to the end.

I braked hard coming into the corner, earlier than I would in a modern car but later than I ought to have done, and it slowed at its leisure and I managed not to lock up the wheels (it doesn’t even have disc brakes, let alone ABS), then flung it towards the apex with a wobble and screech and let it ride across the track and lumber through the chicane.

With each lap, I got a little more confident, learned when to brake and how hard, when to floor it, when to ease off, and how to roll with the weight shift. I got used to the way that it wallowed into corners and stumbled out, wobbling like a fat man promenading down the Las Vegas Strip. It would be terrifying to drive it fast on the roads – at any rate, on narrow, twisty European roads – but it was a lot of fun on a circuit once I knew what to expect, and even more fun to accelerate down the straights, and oh my God the sound!

Then, eventually, I had to give it back and reluctantly walked away.