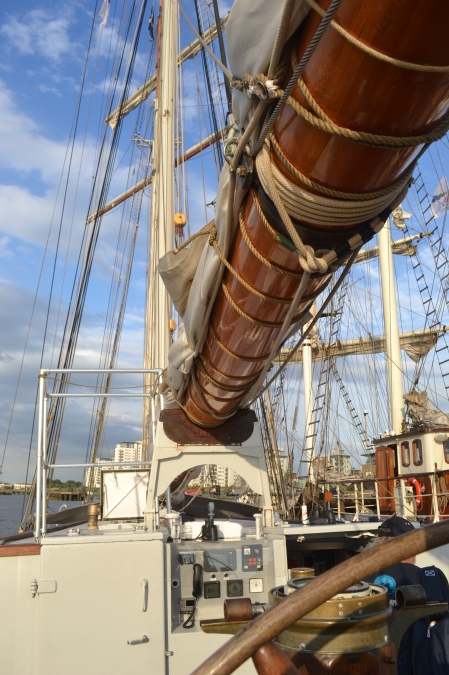 In the summer of 2012, I worked a passage from Stavanger to Amsterdam on the Dutch tall ship, Wylde Swan. I kept this diary, of sorts, with the idea of writing it up into a feature, which never happened:

Arrive in Stavanger in the late afternoon. Blustery day. Call up the number and they come to collect me in the tender and take me out to the ship, which is moored off a small island. Dutch skipper, German mate, Danish engineer, German cook.

The Swan was originally a steamship, built in 1920, on a German flag. It was a herring boat, built for speed. A Dutch outfit bought the hulk in the Noughties and refitted it as a two-mast topsail schooner – biggest in the world, apparently.

More of the crew arrive in the evening, two Dutch, one British (but born in the Netherlands).

Bright and sunny in the morning. Not sailing until evening so get the tender into Stavanger, look round, take photos, get lunch.

Back to the ship. Three more crew aboard, one German, two Dutch.

I’m on the 1pm-8pm and 1am-6am watch, so I’m on straight away. Weigh anchor. Slip out of harbour. Stop alongside another ship for the last crew member (Norwegian) to jump aboard. Get a couple of stay sails up. South, south, south…

Can’t sleep. Read until midnight. Shaken awake at 12.30. Back to work.

Still heading south. Up on the roof at 4am sweating a sail down, gathering and tying. Trimming and tidying; hauling ropes and cranking winches.

Sailing ships are incredibly noisy things: banging and clanking, creaking and groaning. The wind howls across the deck, slapping hard against the sails. It means I can shout and swear when I repeatedly make a mess of coiling a sheet, and nobody hears me.

The sun is coming up and I want to stay and watch it, but I want to sleep more. It comes easily this time.

Ship pitching heavily when my next watch starts at 1pm. A few of the crew are seasick. But it’s a dull watch. Not much to do. A couple of sails up, a tack, but mostly pootling along on the motor. Cloudy and cold but no rain.

I stare out to sea for hours. It sounds dull but it’s more peaceful than anything I can remember. No rushing, no deadlines, no shouty emails.

The work always seems to be in the early morning watch. Strong wind across the deck. Ship heeled right over. Deck soaked. Hard to stay upright. A few involuntary sit-downs. Stretch the safety net across the leeward side so no one goes overboard. Stay sails back up. Exhausting first two hours then quiet after that. Quiet and cold.

Only me and the watch leader still standing. Everyone else on the watch is seasick. I can understand it. The ship rolls and pitches and suddenly the horizon rears up at a 30 degree angle. But thankfully I don’t get seasick.

We reach Danish waters around midnight, down the coastline, past the oilfields. Rigs lit up like Harrods at Christmas. The computer shows tankers all around us but none is in sight. The watch leader shows me how to fill in the log and I do it next time.

Still cloudy at lunchtime. The last watch put up the jibs and top sail. It looks more like a tall ship should now. No mainsail though. It takes 10 men to raise it. They call it “the Bastard“.

Two thirds of the way down the Danish coast by 2pm, heading for Germany. I belatedly hoist down the courtesy Norwegian flag. We forgot about it until now. Don’t suppose it matters.

There was talk of being in Amsterdam tonight but the skipper thinks lunchtime tomorrow at best. We take it for granted now that we can be anywhere in Europe in two hours, and anywhere in the world within the day (more or less). Everyone travelled like this until a couple of generations ago. It used to take a couple of months, I think, to get to Australia.

Another quiet afternoon. Ship porpoising gently. Cruising at around 6 knots. A cruise ship going north is about the only thing I see for an hour. Not even any gulls here. The mate has resorted to cleaning the ship. Must be bored.

And then it starts drizzling.

Slight change of course to break the monotony. Re-trim. Swing on the grinder. Make a mess of coiling the sheet again. How hard can it be for fuck’s sake? 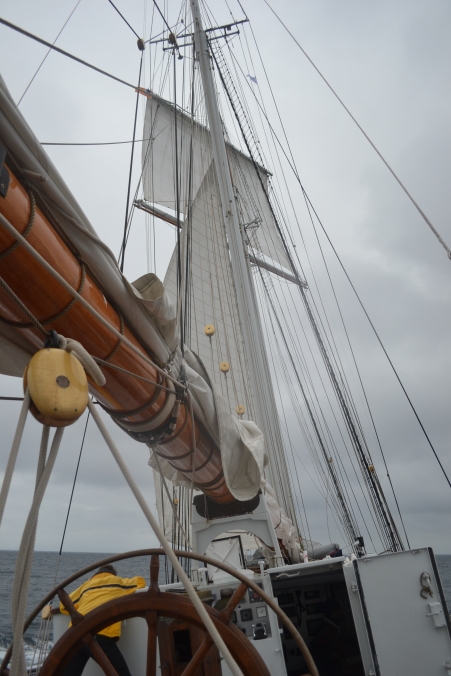 The 1-6 watch is hard. Just as you start to get properly to sleep, some bastard wakes you up and makes you crawl from your bunk and put waterproofs on.

We are in Dutch waters now, I think. Tracking 190 degrees. Cruising at 7 knots. Busy waters here. Tankers all along the horizon.

A quiet watch. Some trimming of sails, nothing too exciting. Music and tomfoolery on the quarter deck.

Dutch coast in sight at 10 30. Sun out too. The last watch has pulled the sails down. Just motoring all the way now: into Ijmuiden, through the locks and down the canal to Amsterdam. Due in early afternoon

Sunbathing on the half deck until my watch starts; sunbathing a while longer as well. Nothing much to do.

On the outskirts of Amsterdam we monkey out on the nets round the bowsprit and pack the sail. Six of us wrestle with the bloody thing to wrap it into a sausage, get it onto the bowsprit and tie a daisy chain round it. People on the bank whip out phones to photograph us and that feels good.

We arrive around 3pm, throw fenders over the side and moor up. Climb the rigging – like something out of a movie – to lower and tie up the topsails.

Grab my bag, say goodbyes and wander towards Dam Square.