Three miles wide at the snout, nineteen miles long, filling the expanse between the mountains like builders’ foam; the powder blue ice, its hollows and crevices appearing backlit by the water within, juxtaposed with the deep green coniferous trees and the stark grey-black of the mountains, lightly dusted with snow and engulfed in low cloud at the margins; a wall of ice, striped with seams of deeper blue and black, rising an average of 240 foot above the surface of Largo Argentino, carved by nature into tens of thousands of tightly-packed columns ranking into the distance like an ancient army massed for battle.

The Perito Moreno glacier in the far South-West of Argentina feeds from the Southern Patagonian Ice Field which straddles the border with Chile and is the last redoubt of an Ice Age which ended 11,000 years ago. It sprawls over an area more than four times bigger than Manhattan or about two and a half times the size of Barcelona. 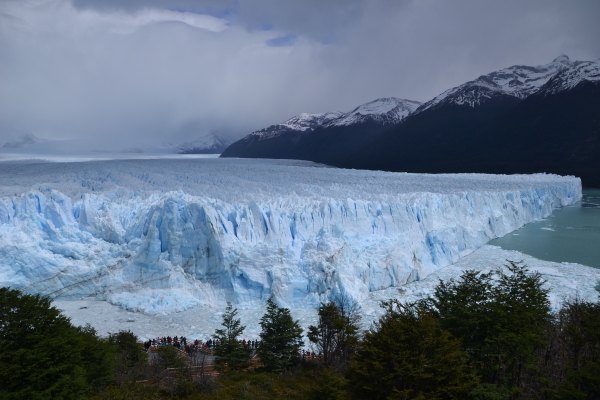 Boardwalks on multiple levels connected by stairs take visitors within a few hundred feet of the snout. Pops and cracks echo from around the glacier as if hunters were out on its surface shooting birds. Calved ice litters the waters around it.

Hours could easily be spent just gazing in awe at the glacier and listening to its cracks and creaks and bangs.  But I was not just there to look. 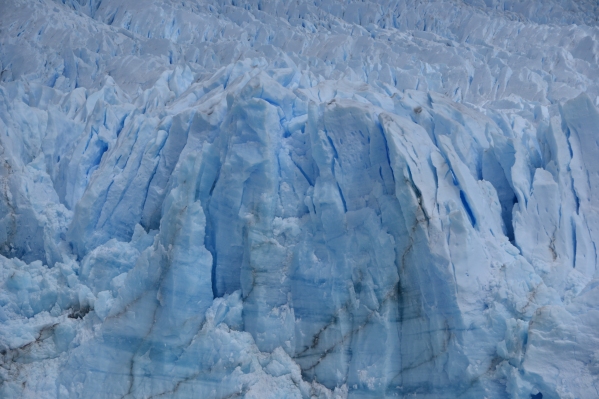 Three years earlier in New Zealand, I arrived in Franz Josef too late to be able to hike on the glacier, as I had hoped, and had to make do with seeing it from the foot of the mountain on my way to the bus the next morning. Now, on a different continent but back in the Southern Hemisphere, the chance had come round again.

I took a boat across the lake to the shelter on the shore by the South Wall, where I was herded into a group of about 15 and had crampons attached to my boots. Two groups were out on the ice already, one about a third of the way up, the other about a third from the summit.

In the middle of the briefing, there was a boom as if of a cannon and then a rumbling, shuttering sound like an office block succumbing to the wrecking ball. I turned and watched as a section of ice thirty, forty, fifty feet high detached from the glacier and slid vertically into the lake, rose again as pulverised fragments and caused a tumult in the water.

We started our ascent.  The crampons, impossible on land, were intuitive on the ice. We moved slowly, in file, behind the guide.  The route weaved between cracks and ponds and glacier mills, where surface meltwater spirals into a shaft in the ice. The ice glistened in the sun. We drank the coolest, freshest water straight from the glacier. 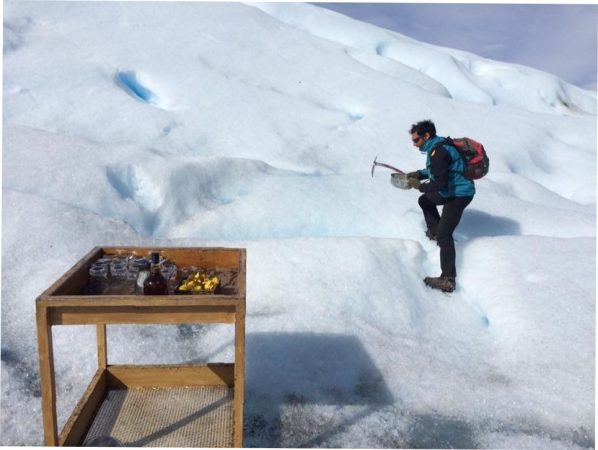 Then, at the summit, the first of the guides produced whisky and glasses; the other harvested ice from the glacier with an axe. ¡Salud! We drank the whisky tempered with chunks of Perito Moreno, packed up and made our way back to the shelter. 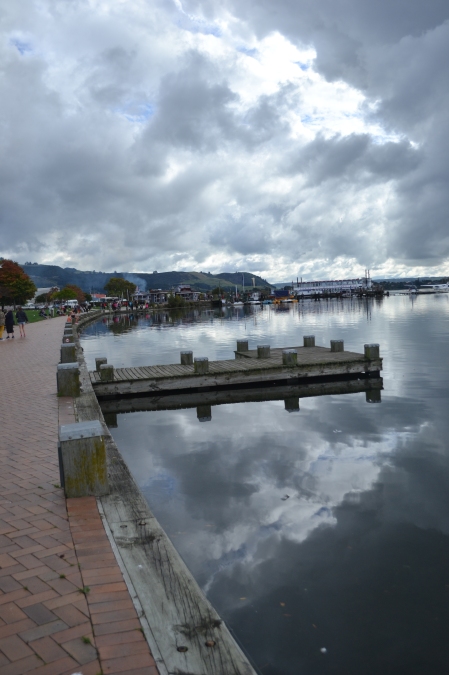 The rain had followed me all the way down the North Island. It didn’t rain all day, all every day, but it did rain every day, and some days it rained all day. Then I got to Wellington and it stopped, and stayed stopped as I took the ferry across to Picton and buses on to Nelson and then to Christchurch.

But it was raining again as the TranzAlpine Express pulled out of the station. I wondered whether its promise of “the trip of a lifetime” was meant to apply in all weathers, but I had not read it literally in any case.  It depends on the rest of your lifetime, I guess.

The train spent the morning threading its way through an operatic landscape from east coast to west, from Christchurch to Greymouth, and the rain spoiled none of it: not the illimitable mountains, not the great swathes of forest with splashes of yellow and brown in amongst the dark green of the pines, not the fathomless gorges, not the fast-flowing rivers way down below. I would not think to call it a trip of a lifetime, but it was a nice way to spend a morning in New Zealand.

It was drizzling in Greymouth, which suited it. The girl on the desk cheerfully admitted that hardly anyone stayed there anymore. There was a For Sale sign outside the hostel. A German couple were the only other guests. “I love NZ but not Greymouth” someone had written on the wood of a bunk in the dorm room I had to myself.

It stayed fine, for a change, the next morning, as the InterCity bus chugged down the coast road and stopped off in the little town of Hokitika for a lunch break.

It stopped outside the National Kiwi Centre, which in the happily small-town way of New Zealand is a modest clapboard building, next door to Jeff Evans Plumbing. They had New Zealand eels, which they told me were anything from 85 to 100 years old and a tuatara, which they called ‘the oldest living dinosaur,’ as well as the kiwis, which I never managed to pick out of the simulated darkness.

The rain started to slap against the windows as the bus continued south to Franz Josef, where I had a hostel booked. It felt like a ski resort with its log cabins, chalets and homely wood smoke. The air was mountain fresh.

There was an anonymous poem from the nineteenth century framed on the wall of the hostel. It was simply called The Rain:

The average fall was well maintained

And when the tracks were simple bogs

It started raining cats and dogs.

After a drought of half an hour

We had a most refreshing shower

And then most curious thing of all

A gentle rain began to fall.

Next day but one was fairly dry

Save for one deluge from the sky

Which wetted the party to the skin

And then at last the rain set in.

Franz Josef Glacier was hidden behind cloud, so there was nothing much to do but go to the Glacier Hot Pools. There are three pools in the middle of a rainforest with glacial water heated to 36, 38 and 40 degrees. It is open air, but with a canopy to keep out the rain.

I only had time, in the morning, to see the glacier from the bottom of the mountain, but it was still impressive from there: a bluey-white torrent of water, eight miles long, stopped and frozen, filling a crevice in the mountain like expanding foam.

I got back on the bus, then, for the last time, for a final dash south to Queenstown. It was an eight-and-a-half-hour run, but I had got used to spending all day on a bus by then.

Needless to say, it was raining. But if it blurred the sky into a miserable smudge, it at least made the waterfalls dramatic. The driver stopped, briefly, to let us get out and scramble through the forest to go look at one.

In the late afternoon, we shot over the Shotover River and pulled into a car park in Queenstown.