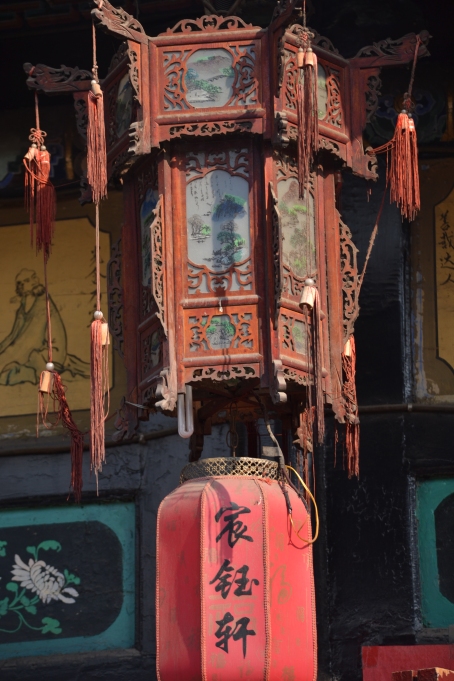 He rattled through the streets on a motor tricycle which was as rusted as he was wrinkled with age. Half a century ago, the whole town would have dressed as the old man still did, in the rough tunic and peaked cap of his better years.

The couple with the donkey cart were silver-haired too. Though they wore modern clothes, their cart might have been already ancient when they were born. It had been built, without thought for aesthetics, from timbers which would have served for a seagoing junk. 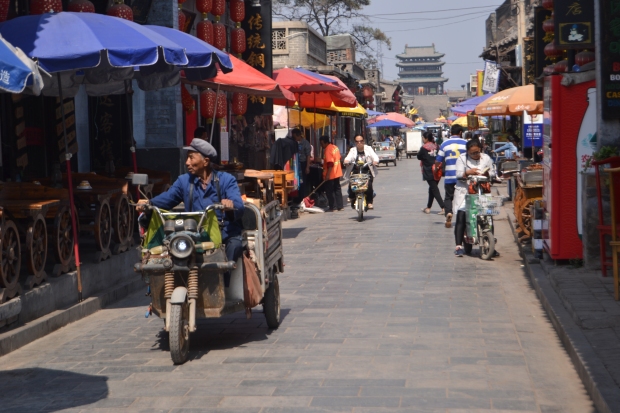 Pingyao is more or less bang in the centre of Shanxi Province. It is four hours from Beijing by bullet train, but the China of bullet trains seems a fantasy of science fiction from inside its city walls.

Virtually all of the 4000 buildings on more than 100 streets and lanes across the square mile within the walls were built in the Ming and Qing dynasties, between the sixteenth and nineteenth centuries. Some are older than that, and the walls themselves have been standing since 1370. There are deep grooves worn by cartwheels in the roads leading up to the gateways. 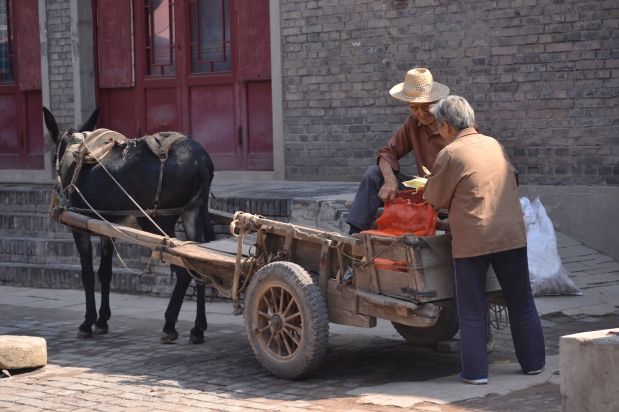 The dust of centuries clings to the bricks of the shops and courtyard houses. Their doors are gouged and dented from the mishaps of generations long passed. Lanterns hang underneath the swooping eaves. Silks, ceramics, antiques and decorative bottles of Shanxi black vinegar are arranged in doorways and tables outside the shops.

A mechanic has dragged a moped out of his workshop into the road. He crouches over it, surrounded by spanners, in an unwisely white vest. The unstoppable tide of domestic tourists eddies around him. Grim-faced ladies cycle against the flow on bikes which creak and crunch and squeal with every stroke of the pedals.

The pagoda-like Market Tower broods over the main drag, which in other cities might qualify as a side street. A road sweeper leans against the wall with studied nonchalance. The reason why is working a street food stall, and he is managing to make her laugh.

Incense wafts from the splendid temples, Taoist and Confucian. There is a small Catholic church in one corner, as well. Marinated pork skewers are rotated over a grill by a contraption which looks as if it is driven by bicycle chains. A clunking museum piece of a machine laboriously produces confectionery. Hole in the wall restaurants serve Pingyao beef and Shanxi noodles, and they are a bustle of scraped chairs and excitable voices in the middle of the day.

The city was an important banking centre in the nineteenth century, although it is hard to credit now. Rishenchang Exchange House Museum is one of several courtyard houses open to the public, either as themed museums or preserved family homes.

It was originally built in the eighteenth century for the Xiyuecheng Dye Company. To spare the worry of carting sacks of silver coins across China, the company began issuing drafts which could be cashed at any of its branches. The idea took off among merchants and became so popular that the owners of the company got out of the dyeing business and became bankers instead. Other draft banks set up in competition, in Pingyao and across the province. 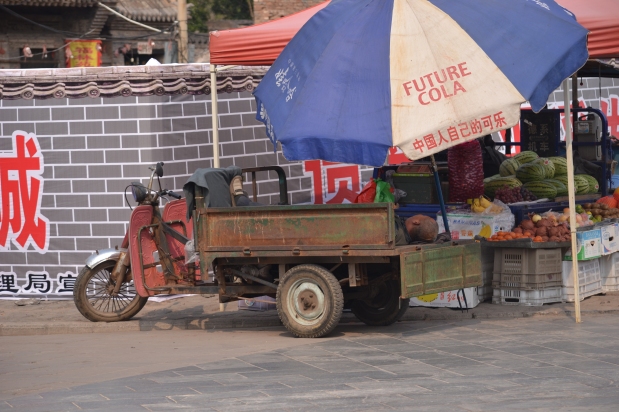 Away from the shops, the restaurants, the temples and the courtyard houses turned into museums, there are quieter corners which the tourists mostly avoid where the shops sell mundane staples and old posters are peeling from the walls.

The dust is more thickly encrusted in these parts. The lanterns are faded and ragged. Chickens scratch around junk in the courtyards. Chillies are laid out in baskets to dry in the sun. Washing is stretched out on lines across the fronts of buildings. The fruit seller has parked his three-wheeler in the shade of the parasol over his stall and is sound asleep in the back. At first horrified glance, he looks like a cadaver.

In the evening when the lanterns are lit outside the shops and the sky fades to a deep blue streaked with pink, then a deeper blue and eventually black and the air is still warm and a girl chars water spinach on a grill on the cobbled pavement with the paifan gate silhouetted behind her and a neon sign for a practitioner of traditional medicine glows in the background, the tourists thin out and the city relaxes and slows to a pace altogether more fitting.

It is a surprise to find the road sweeper still working. But he is perhaps catching up with the work which he should have done earlier that afternoon when he was chatting to the woman with the street food stall.