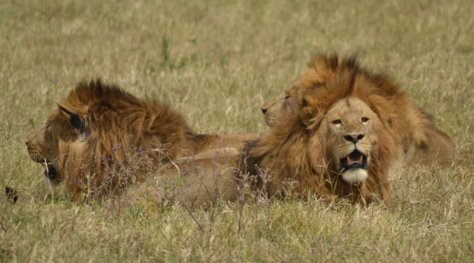 “If you meet a lion on your way to the toilet block,” I was told, “whatever you do, don’t run. Only food runs. And don’t turn your back on it either. Walk slowly, back to your tent, zip it up and pretend nothing happened. Just remember that you’re not their main source of food. And make sure you have your torch with you at all times.”

“Yeah, I wouldn’t want to face a lion without it,” I said.

The Serengeti is just south of the Equator and the nearest town is hours away, and when the sun sets it just drops from the sky and the darkness is suddenly total. The piercing whistle of ten thousand cicadas stole the silence, and birds sporadically cackled and whooped as I zipped up the tent and turned in for the night.

There was nothing to stop the animals coming into the campsite, no fence, no hedge, no one ready with a tranquiliser gun, just in case. Two separate herds of elephants had wandered through that afternoon and trumpeted, stamped and flapped their ears if anyone went too close with a camera. Buffalo and wildebeest grazed around the edges. Baboons were all over the place.

Something woke me up in the middle of the night and I made the long, lonely walk to the toilet block, surrounded by the buzzing cicadas. A glow worm would have been disappointed with the light my wind-up torch gave out. The oinking grunts of the wildebeest were close at hand but they were out of sight. They sounded to be inches away. If they were nearby then, surely, so were their predators. There might have been a lion a foot from me. Remember that you’re not their main source of food. Not their main source!

Don’t run…don’t turn your back on it…walk slowly back to your tent. It is easy enough to say; but if the yellow eyes of a 400lb lion had blazed at me through the night, I would undoubtedly have turned and run, in any direction but the right one. 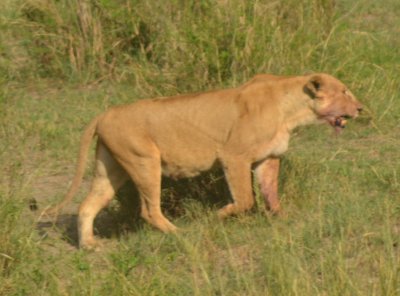 Baboons began barking. It is a horrible, heart-rending sound: a sound of terror, a sound of unbearable pain. Or so it seems, at least, when you hear it when out, alone, in the sinister East African night. “If the baboons are barking,” I recalled someone saying, “it means that leopards are close”. So leopards were out there somewhere, as well. The cicadas hissed, the wildebeest grunted, the baboons barked, a bird trilled, but still I saw nothing. I would not have seen anything, even if something was there. With my useless torch, I would have fallen over a leopard before I saw it.

The cicadas hissed, the wildebeest grunted, the baboons barked and something howled. Hyena? Jackal? I didn’t know what it was but quickened my step until I was all but jogging and reached the toilet block and shut the door and flicked on the light and met an enormous spider.

I got back to the tent and fell into an uneasy sleep, until I was jerked awake again by the gurgling roar of a territorial lion. I would, I supposed, get used to all this in time. 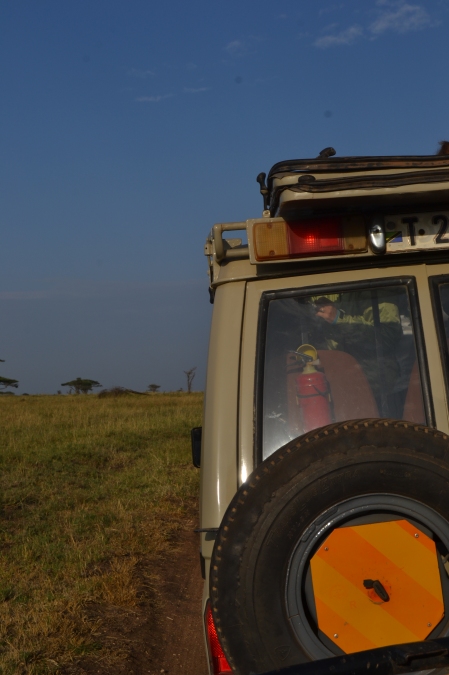 Early morning in the Serengeti, squeezing six to a pop-top Land Cruiser.

A herd of wildebeest crosses the road, five or six deep, stretching for ever. Hundreds of wildebeest, a thousand perhaps. The hooves collectively thunder; a cacophony of oinking grunts. A few get confused and run the wrong way, young males stop to pick fights and hit on the females; but they are all sucked back into the relentless flow.

Thompson’s and Grant’s gazelles, impalas, giraffes and dozens of zebra graze at the side of the track. A dung beetle rolls a dropping the size of a baseball uphill.  A young wildebeest bounds into a herd and tries to take over, but the dominant male sees him off. 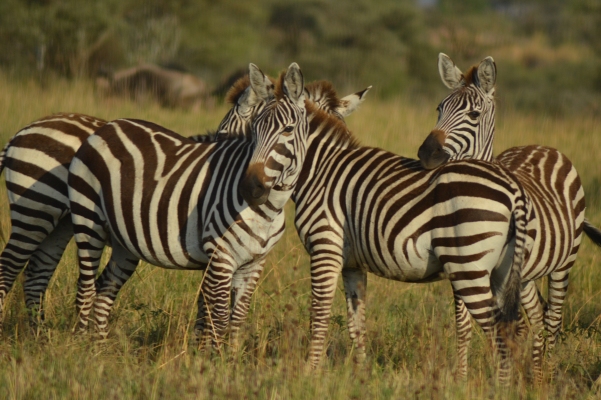 A stream choc-a-block with cooling hippos and, a little apart from them, a solitary croc. They respect each other, like nuclear states, because each could destroy the other. A lioness pokes her head out the bush, peers around, and strolls along the edge of a stream to a shadier spot, followed at a jog by ten unruly month-old cubs the size of little ginger cats. A second lioness acts as rearguard.

Back to the same spot in the afternoon, the trees by then thick with vultures. A lioness appears with blood on her face and paws. The cubs jogs after her in ones and twos and they all clamber down to the stream to drink and wash the blood from their fur, then leap over the water and move on, leaving the carcass to the vultures. 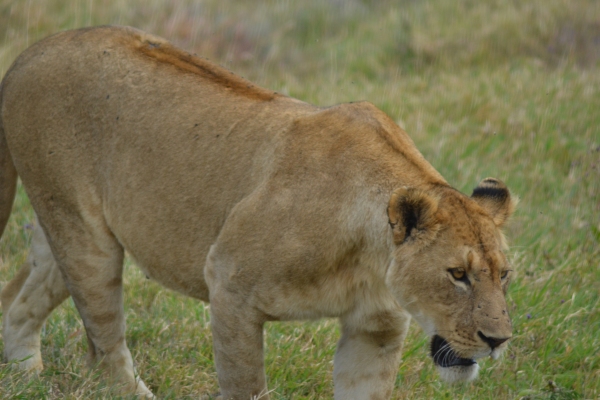 A herd of elephants wants to graze where the lions have gone, and elephants think nothing of lions. They spread out and advance in a row, like soldiers clearing a jungle. One lioness hurries the cubs away while the other stays back and glares at the elephants; but the elephants press on with slow determination. The lioness has to save face, so she waits till the elephants are inches away, then leaves with studied nonchalance. 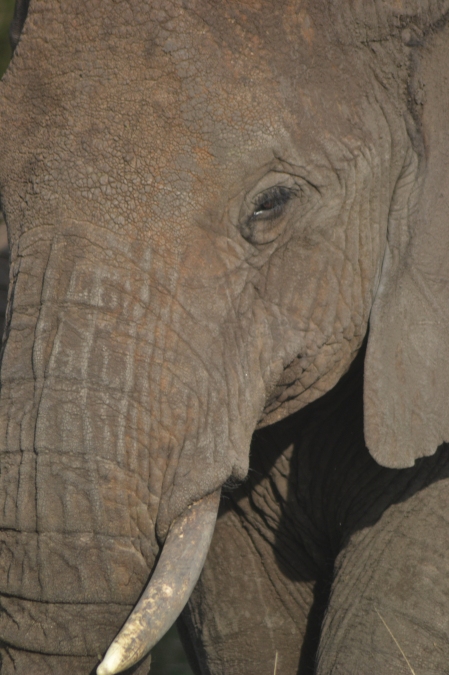 But the jeep will not start. The elephants are looking at us now. One of the bulls flaps his ears and looks angry. Elephants are bad-tempered things. And an elephant will toss over a jeep as casually as you would flick a bug from your arm. Frederick calls out to another driver and asks him to shunt the jeep from behind to get it going. It works.

Thank you very much. You’re welcome.