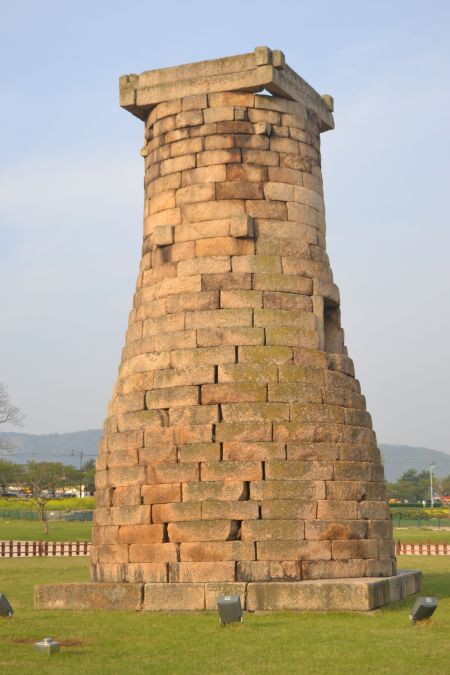 There are two or three blocks of forgettable shops south of the station, then a sudden lake of yellow rapeseed.

Narrow paths have been cut into the rape field and happy young couples stroll through the flowers, stopping to smile and make peace signs for cameras at the ends of poles they hold at arm’s length. The field is floodlit at night and more couples stream in and flashtubes pop across the field like a diorama of a battle.

Beyond the rape field, behind trees, older couples march along paths through the forest to a stream with their ski poles and sunhats and leisure wear as vivid as the yellow of the rapeseed and the blue of the sky. There are hazy mountains in the middle distance and the keenest start early and hike to them.

Gyeongju was the capital of the ancient Silla kingdom which ruled Korea for a thousand years from the first century BCE. The walking trails criss-cross the site of Banwolseong Fortress and there are fragments of the old walls in the undergrowth. The hourglass-shaped Cheomseongdae Observatory is still intact after fourteen centuries and sits, surreally, in the middle of a park.

The kings and their treasures are buried in two dozen grassy hillocks, like a much-simplified form of the Egyptian pyramids. One has been opened up so that visitors can look inside and the whole complex has been modelled into a park with quiet paths between trees and azalea bushes and traditional music piped in through hidden speakers, which gives it a dreamlike quality.

The same music plays, to the same effect, in the grounds of the royal palace. The pavilions and ornamental lake have been rebuilt and the gardens restored and you could stroll there happily for hours, at least if you were not being followed around by a school party repeatedly saying “hello” and “how are you?” because they wanted to practice their English and those seemed to be the only words they knew. It is wonderfully ethereal at night, when the pavilions are lit up and reflect in the lake.

Gyeongju is known, with justification, as ‘the museum without walls’. I filled a day looking at temples and tombs, pagodas and wooden hanok houses and walking along trails through the forest. I planned to hike Mount Namsan, as well, but it turned out to be a lot further away than it looked and I gave up on the idea before I got there.

I set out early next morning on a bike which I borrowed from the guest house. It was a cheap, Chinese-made thing with brakes to trap fingers, sharp edges to scratch and protruding parts to bruise. It was a vicious cycle.

The shifter for the back hub refused to shift. The other had four positions for three gears. The first just made it click annoyingly, the second took me back to where I started, the third made the crank spin like a propeller, and the fourth made the chain come off.

What I had taken, from the map, to be a quiet country road was actually a busy highway; it ran alongside the railway and sloped forever uphill. But there were cherry blossoms, white herons and mountains as well as the concrete, cars and trains.

I guessed that it would take around half an hour, an hour at the most, to ride to Bulguksa Temple, but it apparently takes longer than that in the car. The incline seemed slight but never let up until the turn off for Bulguksa, when it became a long, steep hill. Each sign implied that Bulguksa was round the next corner, or the one after that, and it began to feel like chasing a rainbow.

I got there in the end, though, and it is a splendid temple with pagodas, bridges, statues and intricately carved, gloriously painted roofs set in a forest you could lose yourself in for a day; but it was Saturday and brimming with day-trippers – of course, I was one of them – and instead of the serenity you expect at a Buddhist temple, there was the stress of a big city at rush hour.

It would have been too easy to freewheel down the hill and follow my tyre tracks back to Gyeongju, and instead I took the long way round, up yet another hill, and hoped that it would lead into town. Eventually it did.