It was lunchtime and the okonomiyaki shop was bustling but I got a seat at the counter. Everyone wants to eat okonomiyaki in Hiroshima. Okonomi – yaki, literally ‘what you want, grilled,’ originated in Osaka and is sold all over Japan nowadays; but Hiroshima has a version of its own, known to some as hiroshimayaki.

The chef smeared a circle of batter on the plancha grill in front of me, sprinkled on katsuobushi (flakes of dried tuna), then added several handfuls of chiffonaded* cabbage. To that, he added bean sprouts, sliced squid and a couple of thin slices of belly pork, followed by another drizzle of batter.

He arranged yakisoba noodles on the plancha into the size and shape of the hiroshimayaki, then deftly flipped it onto them with a pair of spatulas. The towering pile of cabbage cooked down to something more manageable and he pressed it down some more with his spatula.

He cracked an egg onto the plancha, smeared it into a circle as he had the batter then flipped the hiroshimayaki again onto the cooking egg.  He flipped it a third time when the egg was cooked, drizzled mayonnaise and an unctuous, Worcestershire-sauce-based dressing over the top, buried it in sliced spring onions and sat an egg yolk on the top. 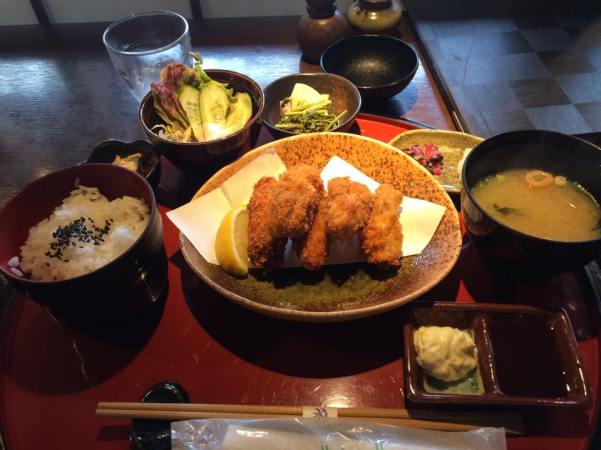 It was very good, if very bad for me. I was thankful that I had mostly eaten fish, rice and lightly-cooked vegetables the rest of the time I had been in Japan. I paid, waddled out and caught the tram, where an old lady stood with a big cardboard box roped to her back and walloped the same three people with it every time she turned round to look out the window, but they were too polite to say anything.

Somewhere around 70% of Japanese oysters are produced in Hiroshima and they appear on menus all over the city. I had them twice in one day, five for lunch deep-fried in panko crumbs and served with a miso soup, a bowl of rice and a delicate salad made with sliced cucumber and leaves, then another five in the evening braised in a broth with udon noodles and sliced spring onions.

I never got to try Hiroshima-style tsukemen, made with cold ramen noodles and served with a dipping sauce made with soy, red chillies and sesame seeds, but I had the same sauce with gyoza dumplings.

I ate in a traditional restaurant, where each diner, or group, had a room of their own and a sliding door portioned them off from the other diners. There was a low table and cushions to kneel on and a button to press when you were ready to order, which presumably sounded a buzzer at the bar and, at any rate, had the waitress knocking on the sliding door within seconds. 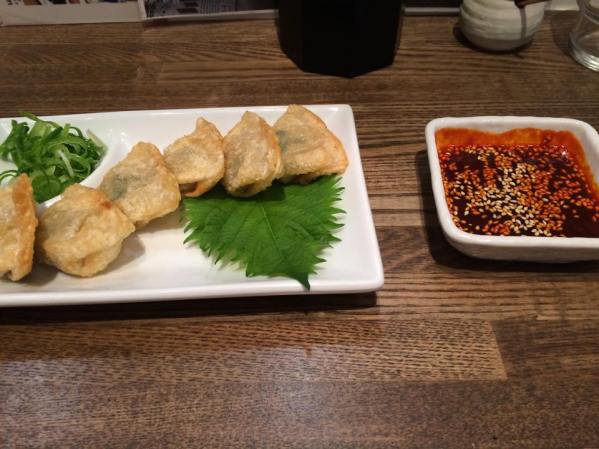 I ate well in Hiroshima, but then I ate well all over Japan and only had one disappointing meal – in an izakaya in suburban Osaka – in the month I was there.