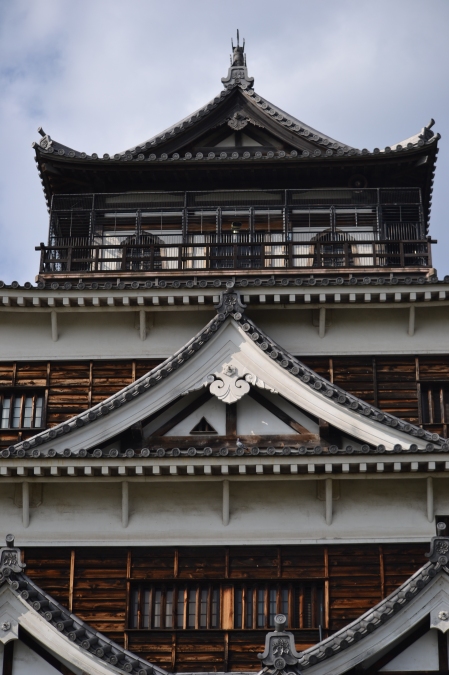 The Ōta River divides into two, then three, then six and empties into the Inland Sea. It segments the city into islets. Historic trams clatter over the bridges. A cobbled path follows the course of the river under the shade of cherry trees which erupt into blossom in late March. In the park, nearby, there is a classical castle, originally built in pine in the 1590’s and rebuilt in concrete in the 1950’s. The original was destroyed seventy years ago today, along with five square miles of the city.

One plane, one bomb, at least 70,000 dead at a stroke, at least the same number again of the after-effects; 70% of Hiroshima flattened.

The ruins of the Prefectural Industrial Promotion Hall have been left as they were at the end of that terrible day, the steelwork of the dome crumpled inwards, the outer wings collapsed, the stonework gouged and pitted. It is often said to have survived because the A-bomb exploded directly above it, but it actually exploded over a hospital 500 feet away and obliterated that. When Dr Shima, who had been out of town, came back to Hiroshima, the only traces he found were the bones of his patients and an implement he had bought before the War, in America.

The area around it, a bustling densely-packed neighbourhood at 8am on 6 August 1945, a wasteland by 8.15, has been turned into a memorial park. What is now the information centre was then a fuel distribution point, where the luckiest man in Hiroshima worked. Just as Colonel Tibbets was lining up Enola Gay for its bombing run, Eizō Nomura popped down to the basement for documents. Everyone else in the building was immolated. He lived on into his eighties. 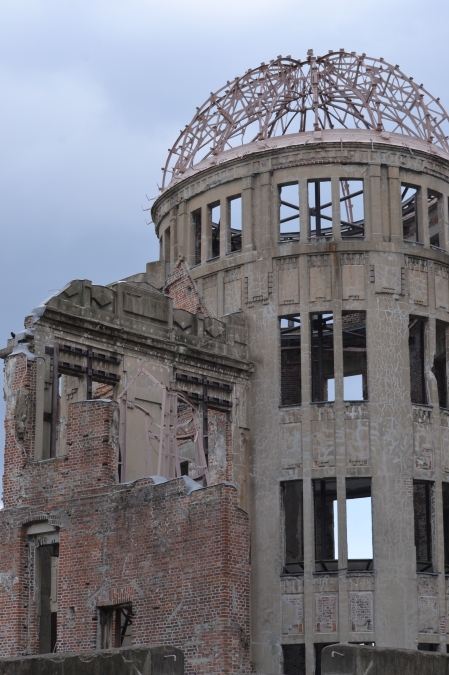 Academics and journalists, hawks and doves, conservatives and radicals have been debating the bombing for seventy years; they will be debating it for seventy more. Was it morally wrong? Was it a war crime? But was it any worse than fire-bombing? Was it justified by Japan’s own conduct? Was the only alternative a hard-fought invasion in which the Allies alone would have lost a million men? But was the War not won already by then? Had Japan not already offered terms of surrender? Was it less about ending that war as forestalling the next one? Was it done pour encourager les autres?

But few on any side of the argument stop to consider what the bombing actually meant, beyond the big numbers. The Peace Museum tells the human stories with dignity. Spectacles, wristwatches, school uniforms, a lunch box, a tricycle, melted tiles and fused bottles anchor the dreadful stories in real people’s lives. The 70,000 dead, not just a statistic but a pile of carbonised bodies: women, children, elderly people, Korean forced labourers, Allied POW’s. The countless more who survived, but with the most horrific injuries.

Across the park, a flame has burned since 1964. It will burn until the last nuclear weapon is destroyed. It will burn for a long time yet.

The nine nuclear states now have, between them, enough weaponry to end the world at the push of a button. It is improbable that any government would make a reasoned decision to launch an attack. But nuclear states have been led by presidents who were frequently drunk. One is currently led by a ruthless and erratic dictator. Mitterand and Carter each left the nuclear codes in suits which they sent to the dry cleaners; Reagan and Clinton mislaid them. Bombs have been dropped accidentally, although mercifully did not explode. There were several occasions in the Cold War when computer errors, warning shots and all too realistic war games suggested an incoming attack and the caution or quick-thinking of one individual was all that prevented a nuclear war being started by mistake.

On every other page of the comments book at the Hiroshima Peace Museum are two words which must surely come into the head of most who visit: never again.