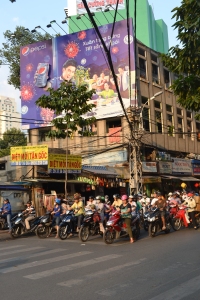 An old man wobbled across the Perfume River on a scooter held together with duct tape and rust. He had a washing machine strapped to his pillion seat and a toolbox balanced on his knee.

A month or so earlier, I had seen a family of three on one scooter – no helmets – on the motorway heading out of Bangkok. Then I saw a family of four, husband, wife and two kids; and I thought that was as many as could squeeze on a scooter, until I crossed into Cambodia and saw five.

The scooters in Phnom Penh scuttle in random directions, like a colony of evicted ants. They make crossing the road an adrenalin sport as they streak past you, too close, performing the horn concerto.

But Cambodia is Switzerland compared with Vietnam. “Seven million people in Saigon,” a guy told me, “and four million scooter”. They swarm like a nightmare of wasps, a cacophony of tiny horns beeping, enough two-stroke motors revving together to outroar a Hell’s Angels convention. They stop for no one, for nothing.

I stood at the lights and wanted to cross but could not see how. Red and green were all the same to the scooters. Then a little old lady in a conical hat with more than her body weight slung from a yoke on her shoulders stepped into the traffic and tottered across while the scooters flowed round her as a river flows round a rock. That is how.

Motorbike taxi drivers lined the side streets touting for business. “Motta bi’, motta bi’” one shouted to me as he jabbed excitedly at his motta bi’. “I know, mate,” I said “I’ve seen one before”. “Marry wanner?” he offered, but I declined that as well. “Lady massage?” That too.

As I made my way up Vietnam, through Laos and back into Thailand, I saw scooters half-buried under bouquets of flowers, and piled up with boxes or water cooler bottles, and a pillion passenger with his arms at full stretch to steady a car bonnet on his lap, and office girls sidesaddle on motorbike taxis, applying their lipstick as they threaded through traffic, and tiny kids blasting down dusty lanes, and the washing machine delivery man crossing the bridge in Huế.