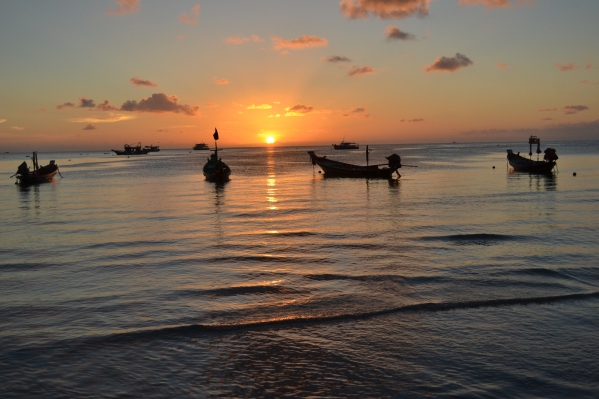 I jumped out of the back of the songthaew (shared taxi) and wandered off to find a guest house. By the time I was a hundred yards down the road, and the songthaew was the other side of the island, it hit me that my daybag was still under the seat. In it were my camera, laptop, emergency funds, spare credit card and enough documents to clone me.

I flagged down another songthaew and got him to take me to the depot, where they asked me a few questions and I was out at the end of the first round:

“What was the number of the songthaew?”

“Was it an Izuzu or a Hyundai?”

“What was the driver’s name?”

I looked in the back of the parked songthaews, the controller phoned round the drivers, and I wrote out my contact details, but none of us expected my bag to turn up.

I felt numb as I headed back to Chaweng, checked into a guest house and dropped off what was left of my stuff. But my spirits rose a bit when I went to the beach and felt the powdery white sand underfoot, and a bit more when I sat with a Singha beer and watched the jetskiers carving up the sea and listened to the waves collapsing on the shore. Gradually, as the sun slipped down, everything twisted into focus. It’s only stuff isn’t it? I told myself.

I had an email in the morning from a girl in Moscow, who told me that her mother was on holiday on Samui and had found my bag and in it a print-out with my email address at the top. The lady spoke no English so had asked her daughter back home, who did, to get in touch with me.  I went in a taxi to a smart hotel up in the hills and retrieved my bag with everything still in it.

I had got back what I had given up as lost for good; but – more than that – I had seen human nature at its best. People might get themselves wrapped up with greed and envy, prejudice and spite; but they are capable, too, of spontaneous acts of kindness towards a perfect stranger.

13 thoughts on “The Kindness of Strangers”