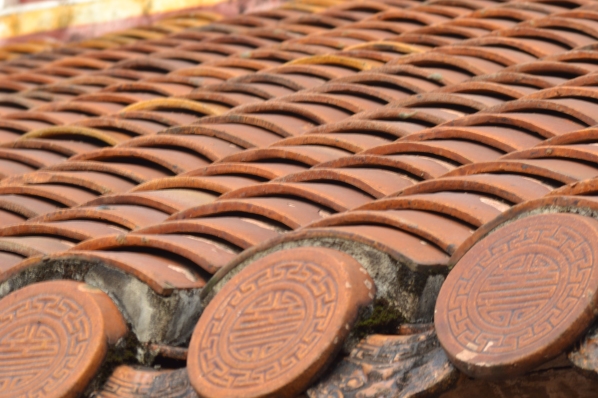 The arches of the Trường Tiền Bridge soar and dip over the Perfume River, where barges which look two centuries old chug back and forth throughout the day, towards and away from the watercolour mountains far off to the west, and where, of an evening, traders spread their goods on blankets laid out on the bank, and street food vendors light their grills and the flames dance and the smoke coils up and the shrimps sizzle and scent the air, and big neon signs flash adverts from the opposite bank, and lights along the span of the bridge sweep from white to purple to yellow to blue to red to green and white again.

Huế was the capital for the Nguyển dynasty which ruled Vietnam from the start of the nineteenth century. A matryoshka of citadels, one inside the other, led through to the Forbidden Purple City, where the emperor lived with his concubines. There were moats and bastions and multi-tiered gateways; and palaces and temples, and gilded columns and carvings and fretwork, and cylindrical tiles surmounted by dragons. It was a place of exquisite beauty.

But the city was bombed and shelled and shot at by three different armies in the French and American wars and much lay in ruins when the bell clanged on the final round of the Battle of Huế, which the US Marines won on points.  “Did we have to destroy the town in order to save it?” asked a Marine captain, echoing what another officer had said about Bến Tre further down south a month before.

There is not a lot left of the Forbidden Purple City beyond the stumps of shattered brick which poke from the grass where palaces used to stand, and a portentous flight of steps bookended with dragons which carries you up to an anti-climactic flower bed laid out in the broken foundations.

Elsewhere in the complex, the buildings have been carefully restored and rebuilt. The work is ongoing and, while I was there, men were tearing tin sheets from the roof of a ravaged temple. Enough has been done to evoke the majesty of the Imperial City that was; but there are still dozens of buildings blackened by napalm, pierced with shells, pitted by bullets, untouched and left to decay since 1968, when the battle staggered to its wearied close.

I spent a good two days wandering the site and – away from the parts which have been freshly restored – I was often alone and there was at least a moat and a two-metre thick wall between me and the bustle of the modern town outside the citadel and the only sounds I could hear were the chirping of birds, the chatter of cicadas and leaves gently falling from the trees.

I strayed into courtyards which time had grassed over and poked inside buildings which looked long forgotten with roofs sagging inwards and rotten doors hanging off hinges. I was not at all sure I was supposed to be there, but there was nothing to keep me out. In one quiet corner, I happened upon an elephant, chained up like a guard dog and left unattended. It huffed and stamped its foot in warning.

In the late afternoon, I left the citadel and made my way across the bridge and back to the hotel with the closing scene of Full Metal Jacket screening in my head:

“We hump down to the Perfume River to set in for the night… I’m so happy that I am alive….”