They were full of shit.

The islands to the south of Peru were thick with seabird guano. It made excellent fertiliser, and Peru millions. They exported it all over the world. In 1864, the Spanish used a flimsy excuse to occupy the islands, and Peru, Bolivia and Chile went to war with them and won. It was the first time that nations had fought over bird shit.

Then, when saltpetre from the Bolivian desert became even more marketable than seabird crap, a Chilean company secured the right to mine it free of tax. But Bolivia reneged. Talks went nowhere, and they ended up at war. Peru joined in on the Bolivian side. But Chile resoundingly won and shifted its border hundreds of miles north through Bolivia and into Peru. Bolivia lost its saltpetre deposits and coastline; Peru lost some of its guano. There is bitterness about it still, 130 years later.

The Chilean army marched on San Pedro de Atacama in 1879 and Bolivia never saw it again. It is an arty, bohemian enclave now, a charming place. Adobe shoeboxes with peeling whitewash and beaten up doors line the main road and half a dozen side streets. The shops sell copper jewellery, textiles and indigenous art. Alternative types sit in the plaza in the shade of the trees overlooking a cute little colonial church.

Two jeeploads of us arrived from Bolivia and, whether it was the waves of positive energy the hippies claim to feel, or the stupefying sun, or just a sense of release after three days driving across the altiplano, everyone seemed to be in a party mood. We went out en masse to eat, swapped stories about scams and overnight buses, and stayed on until late for cocktails.  Some peeled off to their hostels, and the rest of us went looking for a club.

But San Pedro is not as liberal as it seems. There are no clubs, no late bars; in fact, no bars at all outside of the restaurants. There is nowhere to drink legally after one in the morning, and nowhere where it is legal to dance. I discovered that later, though. 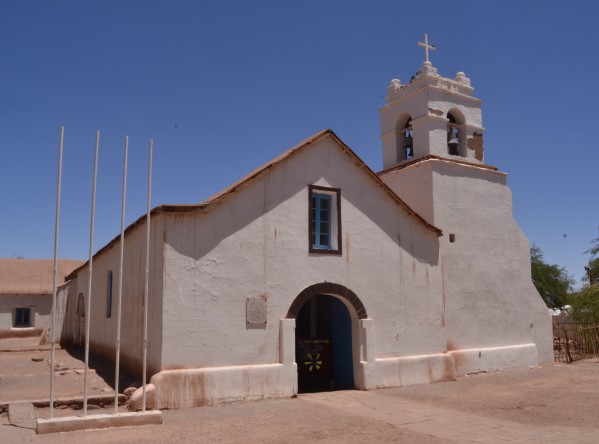 Some locals invited us to a beach party, which was a puzzle because San Pedro is a long way from the coast. Or at least it would have been a puzzle if any of us had been sober. I was not happy with the idea of following them out of town and down a dark lane and away from any houses; but dozens of gringos joined the procession, travellers who had stopped off on their way north or south.

We bought beer from a guy who had stockpiled a few crates and was selling it off can by can, and we plodded up and down the dusty hills, shouting and giggling and talking crap, and the drunkest of our crowd fell over a lot, until we eventually got to the ‘beach’. It was a quarry. The party was a hippie with a Spanish guitar and a bunch of his mates quietly singing along. It was hardly Ko Pha Ngan. But it was all there was in San Pedro.

There was an earthquake next morning which shook the town and knocked things off shelves, but no one who had been to the party noticed. I stumbled out into the blinding sun and trudged in agony to the restobar on the corner, where I ordered two cafés con leche and a medium-sized pizza for breakfast.

My head throbbed, my stomach churned and my mouth felt lined with guano.

4 thoughts on “Of Poop and Parties: San Pedro de Atacama”