Among the fifty-odd pubs in St Albans is Ye Olde Fighting Cocks, which is said to be the oldest in Britain. As is the Bingley Arms in Leeds. And the Man and Scythe in Bolton, the Skirrid Arms in Abergavenny and the Adam and Eve in Norwich. And the Eagle and Child in Stow-on-the-Wold, the Old Ferryboat in Huntingdon, and both the Bell Inn and Ye Olde Trip to Jerusalem in Nottingham.

They cannot all be right. But it is something to tell the tourists.

There is an ancient earthwork on the edge of town and the archaeologist, Mortimer Wheeler, declared that it could have been where Caesar defeated the Catuvellauni tribe. Sure it could. So could my back garden. But the plaque on the gate maintains that it probably was.

So much of popular history is bunkum. Sir Francis Drake did not casually finish his game of bowls before defeating the Spanish Armada. The Victorians were not so prudish they had to cover the legs of their tables. Marie Antoinette did not tell the poor to eat cake. Washington never said that he could not tell a lie (and you would be suspicious of a politician who did).

But tour guides, like tabloid journalists, never let the truth stand in the way of a good story.

In every historic town in England, the guides will insist that if a Welshman tries to sell you fish inside the city walls on a Sunday, you are entitled to kill him on account of a medieval statute which has never been repealed. Well try telling that to the judge.

If you go to Australia, you will be told at least once that kangaroo means “I don’t know” in an indigenous language. The story goes that an early settler – sometimes Captain Cook himself – pointed to a kangaroo and asked a local man what it was. “Kangaroo” he replied with a shrug, and thereafter that was its name.

You will hear much the same story about the llama in Peru. ¿Como se llama?  (what is this called?) a conquistador is supposed to have asked. ¿Llama? said the confused indigenous man, trying to make sense of the unfamiliar Spanish. Gracias, said the conquistador and walked away and noted it down for posterity.

Both tales are plainly apocryphal, and linguists have gone to the trouble of debunking them. Yet they are still routinely trotted out to visitors from abroad.

Hiram Bingham, the explorer who ‘rediscovered’ Machu Picchu (the Andean people had never lost it) guessed that it was the birthplace of the Virgins of the Sun. No, no, others demurred, it must have been a prison. Or a royal estate. Or a place of worship. Or an agricultural testing station. Or a drive-through McDonalds. Or a branch office of Allen & Overy. Nobody really knows. But many visitors pay a guide to hypothesise about what each bit might have been. 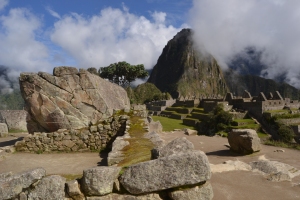 In truth, few tourists seem to care whether what they are told is speculation, exaggeration or quite openly made up. There never was a 221B Baker Street. But there is now. It is the Sherlock Holmes Museum, a Georgian townhouse restored to how it wasn’t when Sherlock Holmes didn’t live there. There are always queues outside. When they screwed a sign for “Platform 9¾”  to a wall at King’s Cross station, it drew such crowds of Harry Potter fans they had to move it. But that was nothing compared with the hordes who squeeze into the courtyard to gaze at the balcony outside the house in which the city of Verona pretends that Juliet Capulet lived.

But maybe they have it right and we fool ourselves when we think we travel to learn things. Maybe it is all about entertainment, a distraction from life, an expensive alternative to watching TV.