It was a magnificent coastline. The rocks extended out into the sea, an abstract beauty above the surface, a dark shadow beneath. The water was turquoise near the shore, fading to deep blue further out. There were stripes of white sand at the foot of the cliffs.

Yet no one sat on the beach. No one paddled in the sea. No one clambered over the rocks. They might have been shot if they had.

A sturdy fence surmounted by razor wire stretched along the coast. The waves broke onto tank traps. There were watchtowers every few hundred yards, manned by camouflaged soldiers with heavy machine guns and rifles. 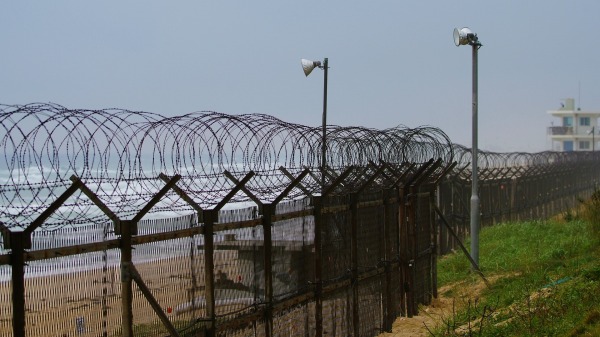 I missed the stop for Unification Park and got off at the next one and set off walking down the coast road, along the security fence. There was nothing to stop me, but it felt like I ought not to be there. It was as if I were walking through a war zone. There was no one else on foot.

It was a hot morning and pleasant to walk and silent except for the droning of insects and the occasional car on the road, and there was a glorious view through the fence. But I could not help but be anxious.  I wondered how I would explain myself to an excitable soldier with whom I had no words in common.

I had laboriously copied 통일공원 – Unification Park – on a sheet of paper to show to the bus driver (he had nodded, then shot past the stop); but I saw the scope for a terrible misunderstanding if I reached for my pocket when challenged by men with guns, so I took out my sheet of paper and clutched it as I walked down the road. I wished that I had not brought my daypack. 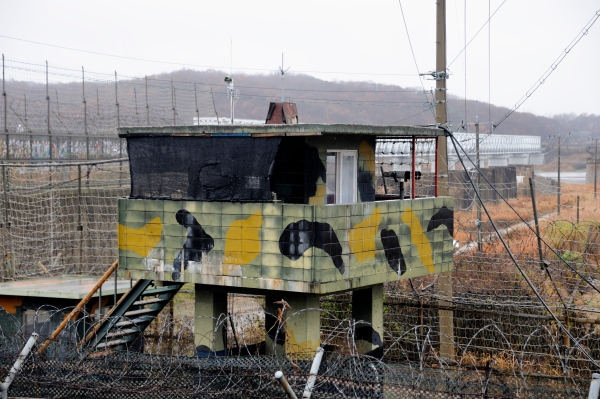 I tensed whenever I walked towards and past a watchtower, and deliberately did not look up at the soldiers, but there was never a shout, or – worse – the click of a safety catch. A troop carrier seemed to slow as it passed me and I thought that it was going to stop, but it was just that the driver was struggling with the hill.

Then a company of fully-armed combat troops with rifles, packs and steel helmets marched up the road towards me. I held my breath as they came close but they marched past, an inch away, as if I were not there at all. It was a routine patrol.

There is good reason for the strong-armed security. One night in 1996, North Korean commandos landed on the shore nearby. When the submarine came to collect them after their spying mission, it snarled up on rocks and stuck fast. The captain burned his papers and tried to destroy sensitive equipment, although it would probably have been of more interest to museums than military intelligence.

He and ten others were later found shot dead, presumed, by some, to have been executed for negligence. The other fifteen tried to sneak back to the North on foot. They stole food, stabbed three civilians, strangled a soldier and stopped at a ski resort to play video games; but after a frantic seven-week manhunt, all but one had been killed or captured. No one knows where the other one went.

The submarine is on walk-through display at Unification Park. It is claustrophobic enough when you squeeze through it alone with all the hatches open: unthinkable to spend days at a time locked inside it with twenty-five others struggling for space between the engines and bulkhead, the pipes, the gauges, the valves, and the periscope tube. It has had a fresh coat of paint on the outside, but there are still the scorch marks and melted radios in the cabin, and a smell of oil and diesel.

Nearby, there is an old American destroyer which went into service a few weeks too late for the War in the Pacific but got its chance to fire at North Vietnam twenty years later, before it was sold to South Korea. It is claimed as the only warship displayed on land anywhere in the world. I doubt that, somehow; but I cannot immediately think of another, and the point is too trivial to research.