The road out of the Serengeti was barely a road at all. The jeep rattled, the windows vibrated, and the contents of my pockets shook themselves free and collected on the seat around me. “African massage!” Frederick shouted over the noise.

He was a confident driver and kept the speed up and steered sharply round any rocks which looked as if they might threaten the tyres. But there had been other confident drivers down that road. One was staring at a jeep upended in a ditch, looking bemused as to how it had happened. Another had abandoned his with the windows smashed, the roof stove in and every panel dented.

Frederick dropped us at a township, where we stayed the night. The stalls on the main street sold Tingatinga paintings to tourists on their way to the national parks: cartoonish animals and semi-abstracts of African ladies. There were rusty old bikes with no handgrips or brakes piled high with green bananas. On the side roads, women knelt and sold lettuces and tomatoes from plastic bowls. Little boys played pool on a table they had made by laying planks over upturned buckets. Their cues were canes and the balls were lemons and limes. 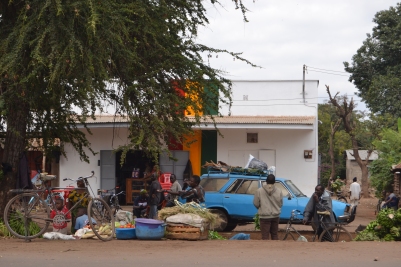 I stared out of the window of the bus heading south in the morning. The country, at times, could almost have been European, except that the scale was all wrong. Nowhere in Europe would you find so much space unclaimed: a place where you can look to the horizon on either side and not see a town, or a farm, or a superstore.

The road passed through dusty townships with huts built from wattle and daub, or mud bricks topped with thatch, or tin sheets nailed to wooden frames. Some had windows, none was glazed. The business names alluded to lions (Simba Freight, Simba Concrete), acacia trees and – incongruously – Arsenal Football Club. Always Arsenal, never Spurs. I saw a “Gunners Supermarket,” an “Arsenal Salon,” an “Arsenal FC Bar,” and the Arsenal logo painted on walls, and on the side of trucks.

Motorcycle taxi drivers waited for custom on Chinese bikes. Men sat and played draughts with beer bottle tops on hand–drawn boards. Perfectly poised women carried jugs on their heads to the well. Children ran out and waved and shouted, except one who jerked up his forearm and gave me the middle finger. I taught him the British equivalent.