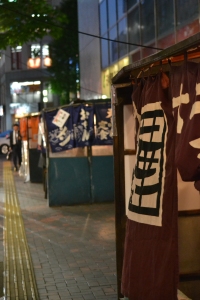 There are few sights in Fukuoka, although there is a handful of heritage buildings, a pleasant park and the remains of a castle, as well as the endless scope for immature sniggering at a name which begins with ‘fuck you’. But there are well over a hundred yatai.

At nightfall, outside the big stores on the main shopping streets, vendors drag trailers up onto the pavement and convert them, Transformer-style, into pop-up restaurants. Yatai, they call them. 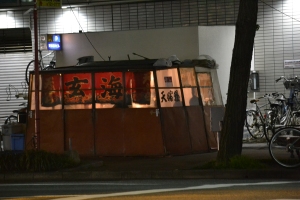 From the outside, they look like workmen’s huts, or makeshift shelters for the homeless, with walls and a roof made of rough wooden sheets and opaque plastic windows. Some are open at one side, some have a curtain made of fabric or plastic, while a few have a proper door.

It is hard not to feel as if you are intruding when you push the curtain aside and take your place at one of the half dozen or so stools round the counter. You will almost certainly be the only foreigner. The other customers will probably be suited salarymen stopping off after work for a snack and a few glasses of shōchū. The chef is unlikely to speak any English; if you are lucky, there might be some English on the menu, and if very lucky it might make sense. A lot of the time, though, you are reliant on pointing, miming, taking pot luck or asking for something which you know they will have.

There is more or less bound to be ramen, and Fukuoka has its own take on this iconic dish. The thick, unctuous broth is made with pork bones and caramelised onion and ginger, and cooked at a boil instead of a simmer, and served with thin noodles, red ginger, green onions and little puddles of black garlic oil. There will be yakitori, meatballs, gyoza dumplings and mentaiko, another speciality of the city: spiced and lightly-seared cod roe.

The first time I ate at a yatai, I sat with a group of salarymen, ties askew and several shōchūs into a bibulous evening, and one of them spoke excellent English – he modestly denied it – and guided me through the Japanese-only menu with suggestions on what to order. The next time, though, I was on my own but for a hit-and-miss app which could sometimes decipher Japanese script and, if it could not, just made something up. I hoped that the “fishermen with morning mist” was good and went well with the “toolshed drunk in water”. The weave of my t-shirt meant “eight,” the app told me in passing.

The yatai stay open into the early hours but I dare say they are much like a British kebab shop later on when people tumble out of bars and decide they have to eat. They are packed up, then, and magicked away in that brief hiatus between the latest drinkers shuffling off home and the earliest commuters marching in to work.

Once the sun comes up, there is no sign that the yatai had ever been there.