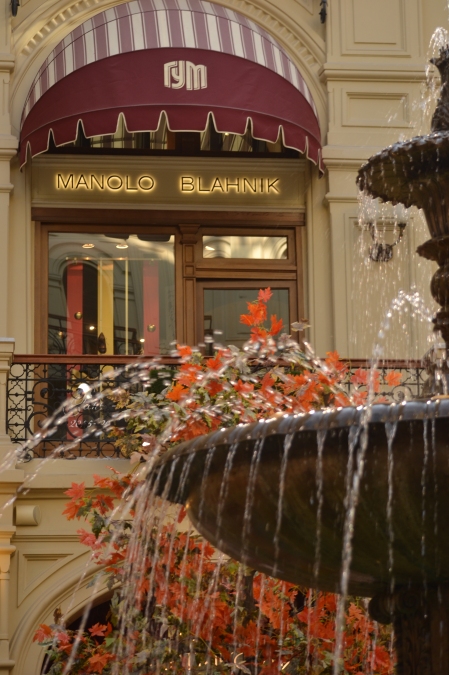 Moscow, in the popular imagination, is much as Tolstoy described it in 1881:

In this imaginary Moscow, Red Square, the Kremlin and St Basil’s are adrift in a sea of sodden tower blocks; vodka-sozzled men are slumped in every doorway and ferret-faced youths skulk in the shadows with flick-knives, and hookers work the bars where Armani-suited ‘businessmen’ drink Champagne by the gallon while their chauffeurs keep the limos running outside.

I ought to have travelled enough, now, to know that the world is rarely as we imagine it to be. Yet Moscow still surprised.

I expected crumbling stucco, peeling paint, broken pavements and potholed roads, but that was still the Moscow of the imagination. The real Moscow was clean, well-maintained and freshly-painted. Not just in Red Square and the streets around it, as you might expect, but out to the Garden Ring and beyond.

The skyline was not the monotony of brutal concrete we are often invited to picture, but an exuberant mix of styles and periods, from the ice cream cones of St Basil’s, the towers, the spires and the domes of the Kremlin, through Tsarist-era mansions, theatres and department stores, through Stalin’s landmark Seven Sisters, modelled in part on and resembling New York’s early skyscrapers, to the smooth curves and sharp angles of corporate towers in the commercial district, like a pastiche of Hong Kong Central.

There is no truth in the idea that the handful of big sights are all that is left of the heritage. There are cathedrals and palaces and shops and apartment blocks built under the Tsars in Neoclassical, Art Nouveau, Eclectic and Russian Revival styles, and redbrick factories built when factories were built to make a statement, and the monumental buildings which Stalin commissioned to feed his vanity. There are unexpectedly few modern buildings and no real carbuncles, at least not until you get out to the peripheries with the scrapyards and big hammer industries.

I thought that all trace of the communist era would, by now, have been carefully erased, much in the Stalinist tradition. But modern Moscow has worked round its Soviet heritage, creating juxtapositions like a frieze of Lenin on the wall of the Valentino store and an advertising hoarding for Porsche under a Socialist-Realist mosaic. Stars and wheatsheaves and hammers and sickles are everywhere, worked into railings around public parks, embossed on doors and carved into the stonework of public buildings. There are still Romanov eagles, as well.

The Yeltsin era stereotypes are outdated now. Sure, I heard Ferraris snarling through the streets, but not as often as in Zurich; and I saw homeless guys sitting by ATM’s, but no more than in London. Moscow is no longer, to the extent it ever was, just the super-rich and the desperately poor with nothing much in between.

Modern Moscow seems overwhelmingly middle-class: a city of mid-range BMW’s and Mercedes, of diffusion-line Armani and entry-level Tag Heuers, of picnics in Gorky Park with a nice bottle of wine from the food hall in GUM, of weekends browsing the New Tretyakov Gallery and contemporary art in the old Red October chocolate factory.

Moscow, without doubt, is a cultured city; it is chock-full of galleries and theatres. Everyone has heard of the Bolshoi and the Maly – the Big and the Small – but there is also the Moscow Art, Lenkova, Mayakovska, Satire, Pushkin, Mossovet, Satiricon, Variety, Russian Army, Kolobov Novaya, Taganka, Romeni, Sovremennik and Yermolova. There were half a dozen theatres within a block of the rooms I stayed in near the Garden Ring.

Despite all the hysterical pieces I have read about violent crime, Moscow felt as safe to me as any European city, much safer than big cities in the US.

This, of course, is a visitor’s perspective. It is in no way meant to downplay the very real problems in this autocratic state. But still, after the first day there, I began to doubt whether the people back home who talk loudly and confidently about Moscow have actually been within five hundred miles of it.