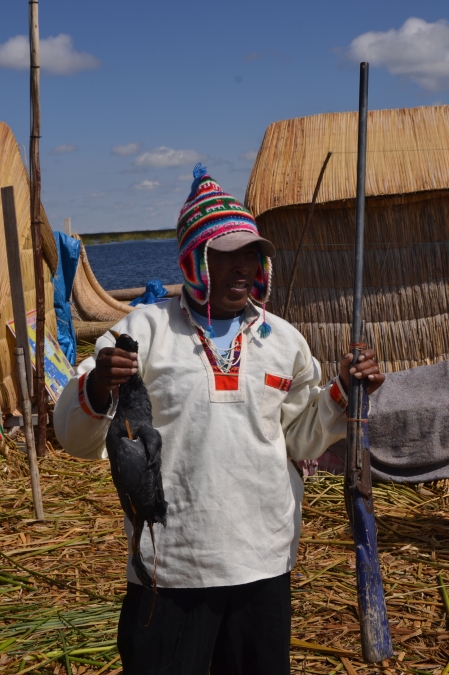 The island was made from layers of totora reeds and looked like a giant hay bale. It was one of forty-four floating islands between the reed beds on Lake Titicaca. As I stepped ashore, it sank underfoot, forcing up a puddle of water. It flexed and wobbled like a plywood sheet laid over uneven ground. Yet a few families called it home.

The Uru people have lived life their own way for hundreds of years. They fled to the lake and built the floating islands when the Aymara arrived in Southern Peru; they anchored the islands to the bed of the lake and stood ready, if attacked, to weigh anchor and row them to safety.

The islands rotted from the bottom up but the Uros maintained them by adding more layers of reeds. They used the same reeds to build huts and watchtowers and the white lower part as a foodstuff: they say that it works as a painkiller and hangover cure and inures them to the cold. They fished with tethered cormorants, kept ibis for eggs and hunted birds with flintlock rifles. 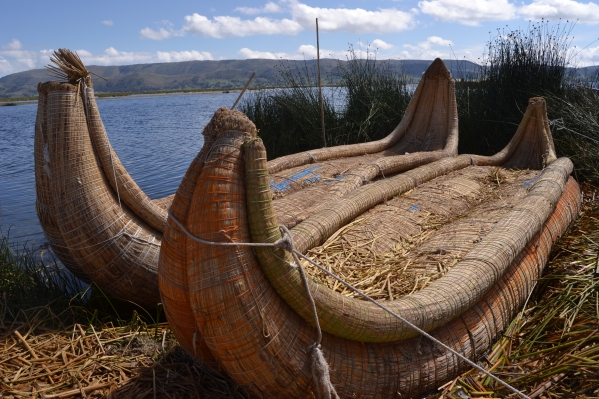 They took bundles of totora reeds to the mainland to barter and sell and, by now, you will have guessed what they made their boats from.

There are solar panels, nowadays, on some of the huts; the Uros have TVs and smartphones, and their own radio station. They have motorboats to get to the mainland, although they still build rowing boats from totora reeds – I was rowed round the islands in one. They earn money, now, by selling textiles and handicrafts to the tourists who visit the islands.

Otherwise, though, their lives seem largely unchanged in the half a millennium or so within which the Aymara where subjugated by the Incas, the Incas crushed by the Spanish, the Spanish driven out by Bolivarian rebels and independent Peru fought wars, in turn, with Colombia, Spain, Chile, Colombia again and Ecuador and went through military juntas, Maoist insurgencies and strong-armed economic reforms. 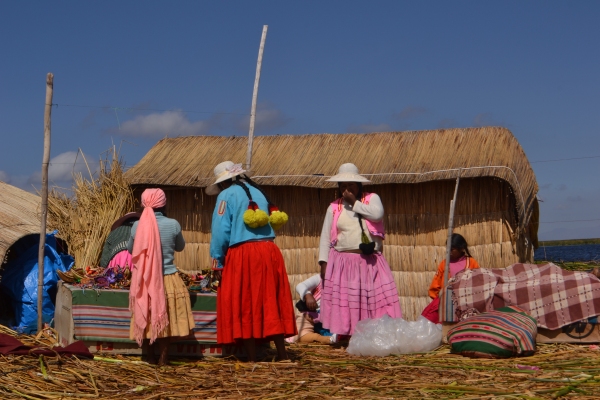 Sceptics maintain that it is all a façade. They accuse the Uros of embellishing their history – if not making it up – to entertain the tourists. But wherever there are people living an alternative lifestyle, there are mainstream figures doing their best to discredit them.

With no written records until the Spanish arrived, neither the Uros nor the Uru-sceptics can prove their case; but researchers have at least established that the Uros are genetically different from other indigenous groups.

Their lifestyle, though, has been under threat since the 1980s, when the government restricted hunting and fishing on Lake Titicaca and started confiscating their eggs and birds. Then climate change caused the surface of the lake to rise dramatically and inundate the islands, and brought droughts which ravaged the tortora reeds.

The Uros rebuilt their islands closer to the shore of the lake and many drifted off to live a regular life on the mainland; others have followed since. The sceptics – who obviously have too little going on in their own lives – claim that no one really lives on the floating islands anymore and that the Uros return to homes in Puno after the last tourist boat leaves.

It seems unlikely to me that they pack up their children, their birds and their cats every night and leave their televisions, solar panels and radio equipment unattended. But, whether fixed or transitory, the population of the islands has undoubtedly fallen and each generation seems a little less interested than the last in maintaining the traditional lifestyle. Tourism is now a major part of the lives of the Uros who remain on the islands, and may soon be their only reason for staying.

2 thoughts on “The Uros and the Uru-Sceptics”