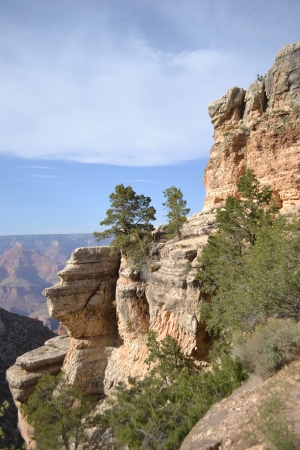 It was only 275 miles to the Grand Canyon.

Back home, that would be the sort of journey you plan for months and talk about for years, but travelling, back to back, through Australia, New Zealand and the US had changed my ideas about distance irrevocably.

I was going to go by bus. I had done similar bus journeys often enough over the past few months: Port Macquarie to Byron Bay (249 miles), Airlie Beach to Cairns (385), Nelson to Christchurch (257), Franz Josef to Queenstown (219), and most recently LA to Vegas (270). But then the agent told me that the bus came at five in the morning, and that meant getting up at four, and four is a time to come in, not go out.

There was another way, though. If I gave up on the idea of a helicopter flight to the floor of the canyon and went to the South Rim instead of the West, I could go on an executive plane for the same sort of money, and get up at a sensible time. 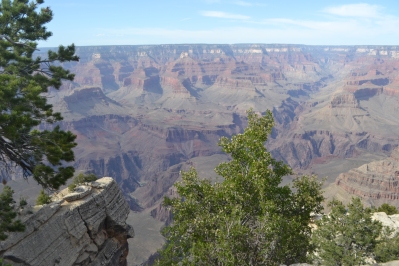 I would never get to fly in an executive aircraft in the ordinary course of things, so it was worth doing just for that. It was essentially a miniature airliner but with the trim level of a Mercedes, and the whole experience hinted at what regular flying might be if airlines gave two shits about passenger comfort and the cabin crew were not on such power trips.

At ground level, only the intense dry heat reminds you that Las Vegas was built in the middle of the desert, but from the air you see that there is little for a hundred miles all around it but mountains and dust.

We flew east over the Hoover Dam, proud symbol of a lost Keynesian world, across the Arizona state line and on over the West Rim and the glass-bottomed Skywalk and followed the canyon round to the airport at the South Rim, where the captain pulled off a perfect landing, shaving off height as we floated down the runway, easing the nose up, and finally settling it gently on the wheels.

“So did I do okay then?” he asked brightly, but did not get the applause he deserved because most passengers expect every landing to be like that and complain if it is not, even in a 20-knot crosswind.

Of course the Grand Canyon is massive; we all know that. The sort of people who fill their heads with facts and reel them off at half a chance will tell you that it is 277 miles long, a mile deep, four miles wide at its narrowest point, and eighteen at the widest.

But figures like that never mean very much until you see the thing for yourself. The vastness of it astonished me. I gazed across at the opposite rim, as you might look towards the outer suburbs from the tallest building downtown, and deep down at the floor where the Colorado River, which carved this great gash into the earth, looked a pathetic trickle.

My eyes recalibrated for the scale, and when I looked round, the people on a nearby ledge seemed for a moment the size of toy soldiers until I refocused again.

The colours in the rock constantly change as the sun makes its way across the sky, from red to orange, from violet to pink; from cream to beige to gold, from grey to blue to green. I could have stayed and looked all afternoon at the contours and folds, the stripes and shadows, the ever-changing palette.

There were warning signs everywhere exhorting people not to try hiking to the floor of the canyon and back in a day but a cheerful group of guys appeared at the rim having done just that and I would almost certainly have had a go myself if I had been there long enough. It looked eminently doable to me.

2 thoughts on “A Flying Visit to the Grand Canyon”