“Lima is a pretty city,” reckoned Che Guevara in The Motorcycle Diaries. “Lima is an atrocity,” insisted Matthew Parris in Inca Kola.

Parris’s impression is the one generally held, especially by those who have never been. Lima has a shocking reputation. It is ugly, they say; it is dangerous. There is nothing much to look at while you are being mugged at gunpoint. Parris noticed concrete and tin, dead dogs and cars without windscreens.

The city is smothered in fog for much of the year, which cannot help to endear it. “The white veil,” Melville called it in Moby Dick. But I was there in late January, when the sky was blue more often than not, and the sun was hot enough to redden my neck. The fogs came, all right; but ephemerally, like dry ice from a smoke machine. 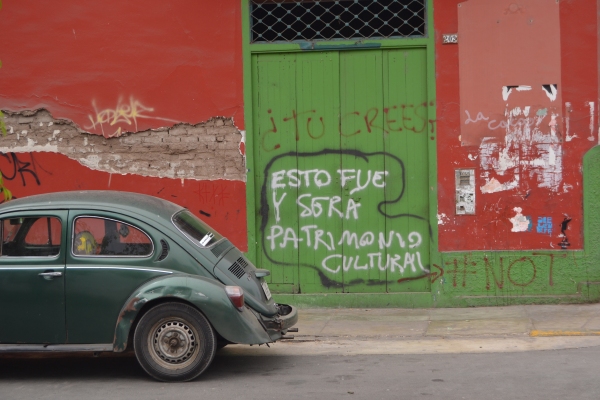 I think Lima must, in any case, have smartened itself up in the twenty-four years since Parris was there. I never saw a dead dog – although strays were everywhere – and saw only one car that was missing a windscreen. Most were in a lot better fettle than the minibuses, which roared along with blowing exhausts, great gashes down their sides and several important bits missing.

Hotel development in the Miraflores district has been about as unsympathetic as it could be (Guevara would have been spared that in 1952); but next door Barranco is full of character with its shabby-gentile colonial buildings in jaunty, contrasting colours like forest green and lilac, anorak blue and orange, and dogshit brown and dayglo pink. It would be a stretch, though, to call it pretty.

The Centro Historico is genuinely pretty with its plazas, its fountains, its grand public buildings and a cathedral to which Guevara devoted a long and exuberant paragraph. You might, for a moment, imagine yourself in an important city in Spain; but the illusion cannot last for long. A shanty town spreads round and up the surrounding mountains, painfully visible from all over town; and just a few blocks from the grandest plaza are workaday districts with litter in the doorways and broken chairs slung onto roofs.

In short, it is not as irredeemably ugly as popularly believed, but it is hardly Cuzco either. The danger is apparently real, but even at night it feels a lot less edgy than somewhere like La Paz.

My guidebook – never knowingly underwhelmed – reckoned Lima “the gastronomic capital of the continent”. That sounds like windy exaggeration, but two of its restaurants are listed among the World’s 50 Best: equal with London, one fewer than Paris. It is the place to go to eat ceviche, Peru’s most famous dish: a buzzword, now, on fine-dining menus in the English-speaking world.

The chef squirts lime juice over sliced raw fish, and then flavours it with garlic, chilli, coriander and red onion and leaves it to marinate so that the acid in the juice “cooks” the fish. “Better than it sounds,” said Parris, who seems to have the classical Englishman’s approach to food and usually only mentioned it when it upset somebody’s stomach.

The version I had at a smart restaurant overlooking the sea in Miraflores used chunks of sea bass, crab claws and scallops, and came with the Peruvian staples, sweet potato and corn. “Una experencia incomparable,” the menu declared with a good pinch of hyperbole, but it was very good.

9 thoughts on “A Perspective on Lima”