The shuttle bus came at first light. The passengers who boarded at the stops up the hill were layered up in outdoor gear. Some carried tents and stoves. They mumbled buen’ dia’s and hellos on their way to their seats. At the terminal on the outskirts, where I had arrived from Argentina two days before, the bigger buses were taking on passengers for the Torres del Paine National Park.

It was a two-and-a-half hour journey, familiar from the minibus tour I had taken on the first day to try to get a feel for the park: mountains, lakes, rivers, waterfalls, icebergs, sun, wind and rain in succession, condors and guanacos, the lesser known of the South American camelids. 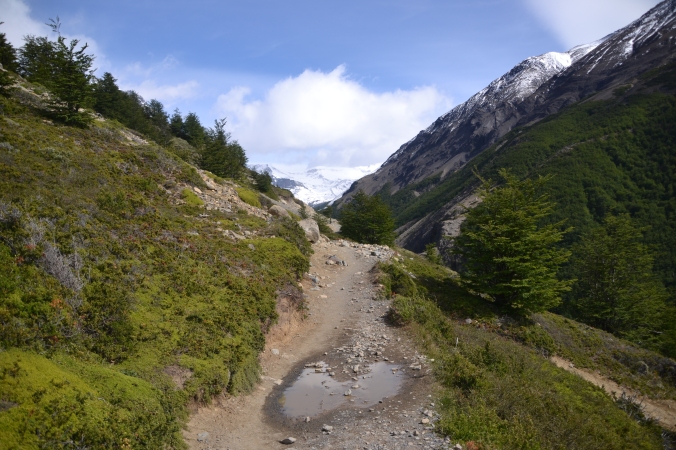 My plan was to hike the first leg of the W Circuit, the iconic five-day trek through the park. The owner of my hostel, who also did a brisk trade in hiring out camping gear, assured me it would be a long day’s trek. It did not really look it on the map. The round trip to Mirador Torres del Paine and back was a little under 15 miles, and I often walked that sort of distance then and it might take me a morning but not a full day. There was a shorter hike I could tag on at the end if I had time to spare.

The peaks soared up in the distance, dusted with snow, obscured by cloud. A desultory stream trickled over rocks at the side of the track. There were scrubby grasslands and hardy trees. To the right was the refugio where the W-trekkers spend their first night. A gaucho galloped a bay horse towards it. 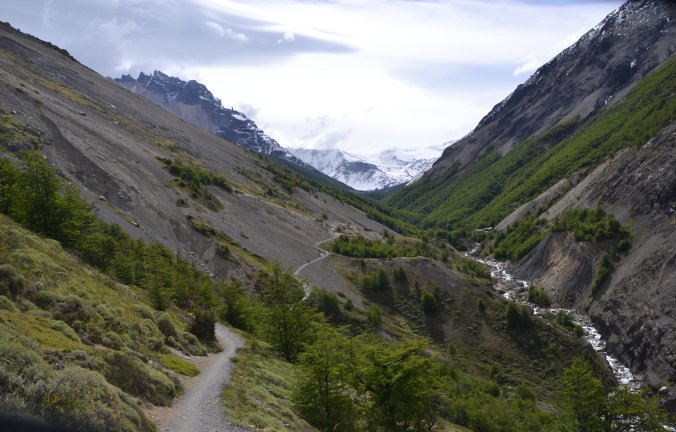 It was warm, now, in the morning sun and I peeled off two layers and stuffed them into my rucksack. About half an hour in, the path turned towards the mountains, became sinuous and steepened. I snarled up behind a tour group then managed to pass. There were conifers bent at an angle from the wind and pretty red alpine flowers.

In the first hour, according to my stats, I climbed from 400ft above sea to over 1000. By two hours, I was at 1500, by three at 2,300. There was a clatter of hooves behind me. I pressed myself to the side of the track as more gauchos passed with supplies for the refugios along the trail. I looked back at a lake far below and the snowy mountains beyond it.

The trail cut diagonally along one side of a valley. The opposing peaks appeared coal black, except where they were streaked with snow. The snow lay thickly on more distant mountains and the winds swirled it round their peaks. The river bubbled over rocks at the foot of the valley.  The Patagonian wind howled all at once. The temperature plummeted. I wrestled first a softshell then a puffa jacket from my rucksack and they flapped like a sail ripped from the mast in a storm.

Up and over the ridge and the wind disappeared as suddenly as it had arrived and I pulled down zips, pushed up sleeves and tore off layers again. The trail led into the forest and I walked under coniferous trees. I crossed and re-crossed and walked along the river. The water was turquoise and clear and frothed as it eddied round rocks. The boulders beside it were bleached by the sun. The bridges were wooden and rickety. One crossing was just a broken ladder and a few planks of wood slung into the shallows.  I tramped through the grounds of a refugio with tents wherever there was space and travellers lounging on the benches outside the dorms.

It was somewhere around lunchtime when I reached the Torres camp site and I stopped to eat the empanadas de pino from the supermarket in Puerto Natales. What I took to be a wolf emerged from the trees and trotted passed me and I jumped up in alarm and knocked over the bottle I had placed on the floor. The water dribbled over the dust as the animal loped through the campsite. No one else seemed to mind it and I think it was actually a grey fox, not a wolf. I picked up the bottle and salvaged what I could of the water and my pride.

The trail became markedly steeper from there and progress was slow as hikers in front picked their way over rocks, between boulders, relying increasingly on walking poles. There were repeated bottlenecks. Until then, my average pace had fluctuated between about 20 and 30 minutes a mile but now fell to almost 60. The frustration, though, fell away, at a little under 3000 ft above sea as I stood at the edge of the turquoise lake staring up at the three great shards of granite for which the park is named. Las Torres del Paine, ‘the Blue Towers’ in a mixture of Spanish and Tehuelche, the extinct native language of that part of Chilean Patagonia.

It had taken four hours in all to reach the top and it would take another three and a half to get back to the refugio where I had seen the gaucho that morning. I had been naïve to imagine that I might have time to fit in more hiking that day. All that remained was to recline in the sun with a book and wait for the shuttle to Laguna Amarga, then pick up the bus back to Puerto Natales.

10 thoughts on “What a Paine: Trekking in Patagonia”