Lunchtime was over in the Place el-Hedim. There was one man left at the clusters of tables outside the cafes, smoking and sipping mint tea. A black-and-white cat, with no food to beg now, bent in a yoga stretch under a chair and scrubbed at its fur with its tongue. Families promenaded, hand-in-hand, line-abreast. Redoubtable ladies in pink djellabas and hijabs sceptically fingered tagines at the traders’ stalls.

In the souks beyond the square, Berber rugs hung from the walls. Babouche slippers and hand-painted plates were arranged in colour-coordinated rows. There were piles of olives and mounds of spices, and dates and figs buzzed by wasps.

Meknès is the lesser known of Morocco’s royal cities, by which I mean I had never heard of it until I planned this trip. You could spend all day in the Medina without seeing a traveller from anywhere in the OECD, and you are hardly ever hassled. There is no need for the benign protection racket of the official guides of cities like Fèz, who are not so much there to show you round as to stop you from being constantly, constantly bothered by the men who block your way, get in your face and angrily demand to sell you some unwanted assistance.

The old cigarette seller sat on a ledge with his friend in a clean, white kufi cap and an ill-fitting jacket over a sweatshirt in the heat of the mid-afternoon. The cigarettes were an American brand with a health warning in French and the pack of 200 was unopened. People strolled by in woollen djellabas with the hoods up, and sweatshirts with the hoods down, and white thobes and prayer caps, and denim jackets and baseball caps, and none of them bought cigarettes. Scooters snarled past. Grands taxis pulled up and disgorged their passengers across the road near the iconic gateway. 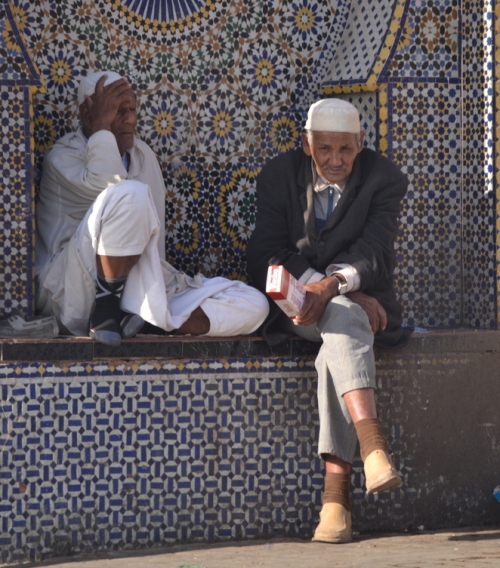 Bab el-Mansour boasts in its Arabic inscription, “I am the most beautiful gate in Morocco. I am like the moon in the sky. Property and wealth are written on my front”. All of that might be true, but the gate leads to nothing but an art exhibition. There is a door nearby into the old city.

Moullay Ismail made Meknès his capital on becoming sultan in 1672. He was a son of the founder of the Alaouite dynasty which runs right through to the present-day king and his rule overlapped with Louis XIV of France and William and Mary in England.

Horse-drawn calèches stand ready to clop you round the walled city and in and out of keyhole gateways, stopping at the roofless remains of Ismail’s cavernous stables which once housed 12,000 horses but are home now to a few retiring tabbies, and the mausoleum of the sultan himself which is an opulence of zellij tiles, archways, pillars, fountains, carved stucco and worked metal.

In the late afternoon in the ville nouvelle built by the French, where the buildings are blocky and functional and the pavements are broken and the shops sell stationery and sportswear, fruit sellers congregated on the corner of the street and bantered with customers. There was a man with a pushcart filled with leafy oranges, two more with bananas in boxes which warned in Spanish that they needed to be handled with care and a father and son team selling grapes. 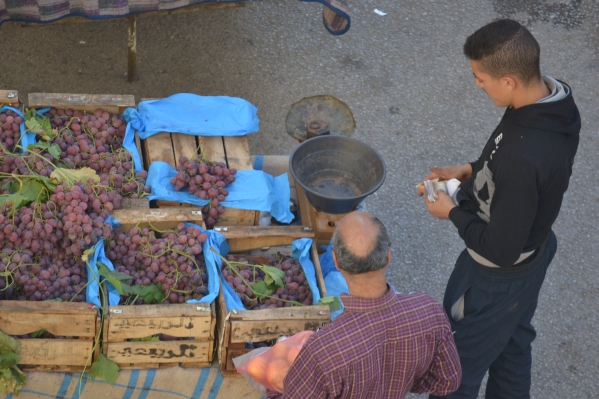 An imam, spotless in head-to-toe white, stood out from a crowd in tracksuit bottoms and scuffed leather jackets. A man with dreadlocks and the backs of his shoes turned down shuffled to the bottom of Rue d’ Accra and back every half hour or so. There was some unpleasantness on Rue Antsirabe between cackling teenagers and a loudly protesting old man. They had stolen something he had leant outside a shop and run down the street with it. But a woman burst out of another shop and made them take it back.

The scene faded to darkness. The crowds thinned. The fruit sellers packed up and melted away. The shutters came down on the shops. The call to prayer floated across the roofs from the Mosque.

I had only planned to stay in Meknès as a base for Volubis and Moullay Idriss, a stopping off point between Fèz and Rabat as I travelled down the country, but it had been well worth a visit in its own right.